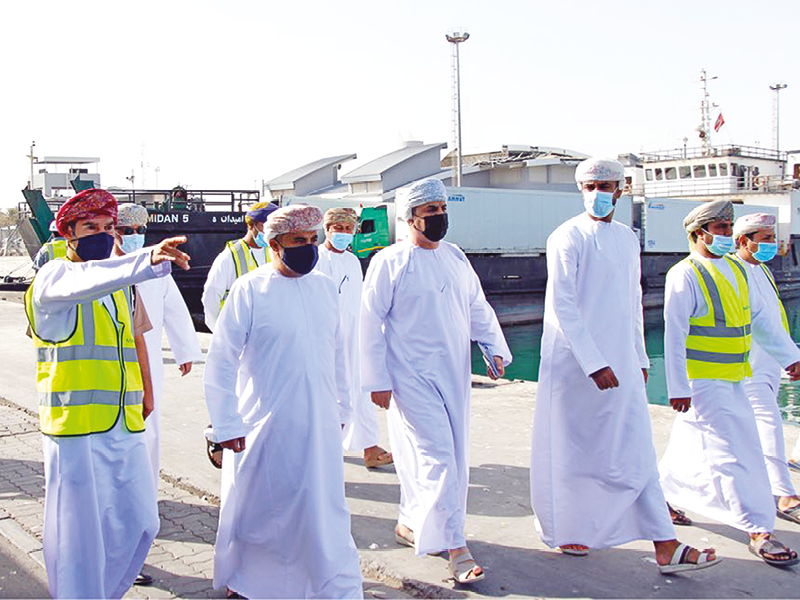 He was accompanied by H E Eng Salim bin Mohammed al Nuaimi, Undersecretary for Transport, and officials from the ministry.

The minister started his visit by inspecting the locations of the seventh package of the Batinah Expressway project. Later, he listened to a briefing about the project and its components, such as linking roads and bridges over roundabouts in the Batinah dual carriageway and a 14km road connecting Khazaen Economic Zone to Batinah Expressway. A field inspection was also conducted in some parts of the Batinah Coastal Road, following which the minister and the team visited Suwaiq port.

He reviewed its operations that has seen a rapid growth since its commercial launch in September 2018.

The minister also inspected Suwaiq port berth, which Marafi has extended to reach 289m. The extended berth contributed to increasing the port’s capacity, making the port handle more cargo and provide extra space. The new addition will also attract private sector investments in value-added projects to the port and the future expansion requirements.

Later, the team visited Sohar port to review the port and free zone’s strategy to hasten growth during the next five years (2021-25) and how the ministry can provide proper support to this growth strategy.

The Sohar Port and Freezone chairman of board and the executive administration team were there to receive the minister.

The delegation also visited Hutchison Ports Sohar and reviewed a comprehensive presentation of the terminal’s performance in 2020.

The terminal has handled more than 802,000 TEU in 2020 compared to 796,000 TEU in 2019, an increase of 0.7 per cent annually despite the challenges that hurdled the global supply chain following the outbreak of the coronavirus pandemic.

The minister concluded the day with a visit to the Wadi Haibi road which connects North Batinah governorate with Dhahirah governorate.