Severity of COVID-19 has not reduced until now: H E Sa’eedi 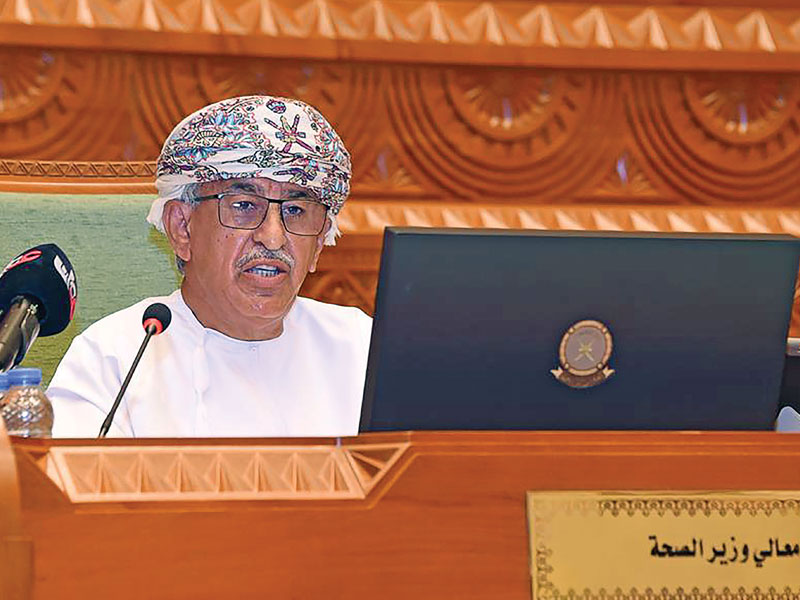 Even though the number of COVID-19 cases is low in Oman, the severity of the disease has not yet decreased. The fewer number of cases is due to everyone’s commitment to the precautionary measures, according to H E Dr Ahmed bin Mohammad al Sa’eedi, Minister of Health.

Addressing the Majlis A’Shura on Sunday, H E Dr Sa’eedi said, “If we did not implement the complete closure (of activities), the human and economic losses would have been greater. There were serious violations by some quarantined patients, which we were able to detect through the Tarassud+ app.”

He noted that there are advanced countries that reached a stage where they selected cases for intensive unit care. “We did not see such a situation thanks to your cooperation with the Supreme Committee. We have also not reached a point – and hope that we never do – of shortage in oxygen equipment or having to prioritise younger over older patients as in some countries,” H E Dr Sa’eedi said.

He informed that the Ministry of Health (MoH) didn’t stop conducting coronavirus tests at any point in time, and that the number of samples tests was as high as 6,000 on certain days.

To ensure that Oman obtains the required quantity of vaccine, several negotiation channels have been opened with the Global Alliance for Vaccine and also directly with vaccine manufacturers. H E Dr Sa’eedi assured the Majlis A’Shura that Oman will not import any vaccine or medicine without ensuring its safety and compliance with health standards and requirements. More doses of the Pfizer-BioNTech vaccine are scheduled to arrive soon.

“No Russian or Chinese vaccine has been booked; 370,000 of the Pfizer vaccine have been reserved, some of which will arrive this week or the next,” he said, adding that 100,000 doses of the Oxford-AstraZeneca vaccine have also been booked which are expected to arrive within a week.

H E Dr Sa’eedi informed that since the launch of the national campaign for immunisation against COVID-19 on December 28, 2020, more than 27,000 people have been vaccinated with the Pfizer-BioNTech vaccine with 99 per cent coverage rate of the target group.

He cautioned that even as the MoH exerts every effort to keep the situation under control and the continuing economic constraints as a result of falling oil prices, there are serious challenges facing the development of healthcare in the sultanate. The challenges include limited financial resources and shortage of human resources.

On Tuesday, the MoH announced 558 new cases of COVID-19 during the last three days, taking the total to 133,044. There were four deaths and 1,532 recoveries during this period.

‘The number of recoveries has increased to 126,262, while the number of deaths has reached 1,521,’ an MoH statement said, adding the rate of recovery now stands at 95 per cent.

A new law promulgated by the MoH makes it binding on the private sector to Omanise medical posts. “We in the health sector have absolute faith in Omanisation, and replacement is taking place gradually. The Omanisation of dentists in primary healthcare institutions has been achieved 100 per cent,” H E Dr Sa’eedi said.

“The Omanisation rate in the pharmacy sector in the private sector is still unsatisfactory. In the institutions of the MoH in this sector, Omanisation has reached 95 per cent.”

H E Dr Sa’eedi assured that Omani cadres are well trained. “We assure everyone that the international protocols are followed for treatment in the sultanate and I have full confidence in our health cadres.”

According to H E Dr Sa’eedi, there are 39,413 Omanis working for the MoH. “The Omanisation rate in the ministry increased to 72 per cent in 2019 compared to 69 per cent in 2016. The medical and paramedical groups represent 79 per cent of the total employees,” he said.

H E Dr Sa’eedi said that the MoH has embarked on drafting the health sector’s 10th Five-Year Plan with several new projects and expanded programmes to be implemented during the years of the plan, depending on the state’s general economic circumstances.

He informed that the MoH has four referral hospitals offering tertiary healthcare to the sultanate’s population. “These are The Royal Hospital, Khoula Hospital, Al Nahda Hospital and Al Masarra Hospital, which have a total of 1,639 beds, with occupancy standing at 70.7 per cent.”

He added that the nine referral hospitals in Muscat governorate have a total of 23,178 beds, with occupancy standing at 56.2 per cent. Sohar Hospital has the highest occupancy rate in the sultanate (79.6 per cent).