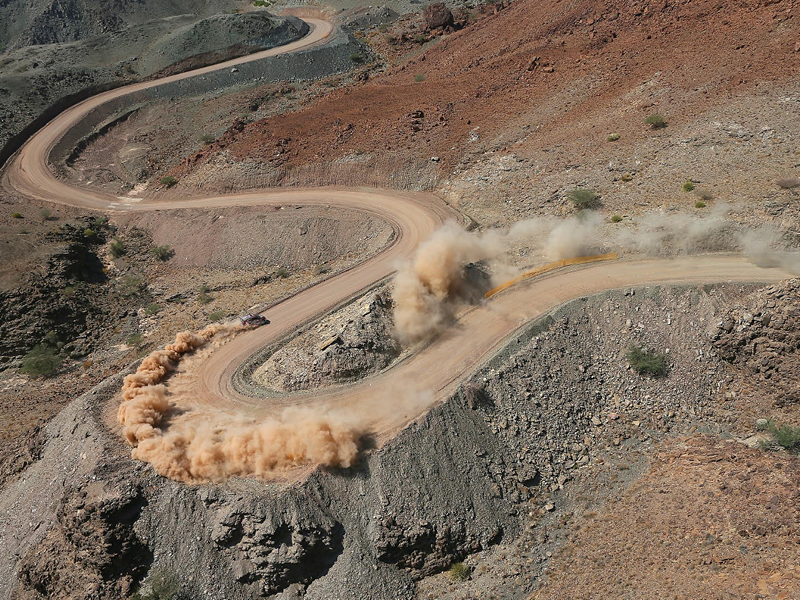 Motorsports fans in Oman are all set to be treated to a variety of top-class events, starting early next month. The Oman Automobile Association (OAA) has been in the forefront over the past couple of years to enhance the reputation of Oman as a world-class venue for various motorsports events.

And the OAA has met with considerable success in recent times with the return of the Oman International Rally as an important event in the FIA-Middle East Rally Championship (MERC) calendar in 2020.

It is just not the fans of rally, which has a glorious history in Oman, who are going to celebrate in the coming months but OAA has ensured that there are activities, competitions and championships in different fields.

The first of the three back-to-back international events that will set the ball rolling in Oman will be the opening round of the Oman International Drift Championship (OIDC), which will be held at the OAA Drift Arena on February 4-5.

The screeching noises, the air filled with adrenaline and the smell of tyres burning the tracks ablaze with 45 skilled drivers from 15 countries fighting it out will be a battle to watch and preparations are already on track to make it a huge success.

The second round of the championship will be held at the same venue on February 11-12 and the OAA has already confirmed entries from 17 nations, including drivers from US, UK, the Netherlands, Latvia, Lithuania, Malaysia, Pakistan, Jordan, UAE, Saudi Arabia, Syria, Kuwait, Lebanon, Ukraine, Russia, Qatar and popular names from Oman.

This is the fourth edition of the popular event and over the years, thousands have attended the event, that has a strong following in the sultanate.

There is no let-up for motorsports fans in Oman as February will also have rallying fans rejoice as the 2021 Oman Sohar International Rally will be staged from February 18-20.

The new branding as Oman Sohar International Rally comes in the wake of the full support provided to the MERC round by Bank Sohar.

Defending champion Nasser al Attiyah, who recently finished runner-up at the gruelling Dakar Rally and is a 16-time MERC champion has confirmed his entry and will be defending his title. Last year, Attiyah had begun his MERC campaign in Oman but this time, Oman will be the second leg of the series with the opening round to be held in Doha, Qatar from January 29-31.Oman’s own talented rallying star Abdullah al Rawahi did the sultanate proud when he finished overall runner-up in the interrupted MERC season last year due to the coronavirus pandemic.

Seven R5 cars have entered in Qatar along with Abdullah, who aims for a podium finish before returning to Oman for the next round.

Among the other leading names taking part in the Oman Sohar International Rally from Oman are Zakariya al Amri, Zakariya al Aufi and  Hamed al Wahaibi.

If February witnesses action for the big boys of drift and rally, March will have the best of go-karting sensations vying for the top honours at the Middle East and Africa (MENA) International Karting Nations Cup.

The MENA Karting Cup concept is an evolution of significant contributions from many MENA associations over the past few years. Oman will host the second edition of this exciting event with the support under the auspices of the FIA Sport Grant Programme from March 3-7.

Go-karting racers from 21 countries have already confirmed their entries in a sport that is popular in Oman. In the past, Oman have produced go-karting champions of the likes of Abdullah al Rawahi, Sanad al Rawahi and Shihab al Habsi.

Last year, Oman made history as it was the first time that an international go-karting event of such big magnitude was held at the Muscat Speedway.

Buoyed by the success, the OAA has once again decided to host the contest that features state-of-the-art Rotax powered karts Speaking to Muscat Daily, Suleiman al Rawahi, the OAA managing director said, “The three international events underline our capabilities to host world-class motorsports events. We are proud to host them, and hopefully, Oman’s stature as a growing destination for motorsports will gain more popularity and respect in the region.”

Last year, when the MENA Cup was held, Oman also had organised the FIA MENA Congress in Muscat, with FIA president Jean Todt among the dignitaries attending the gathering of international motorsports federation leaders.