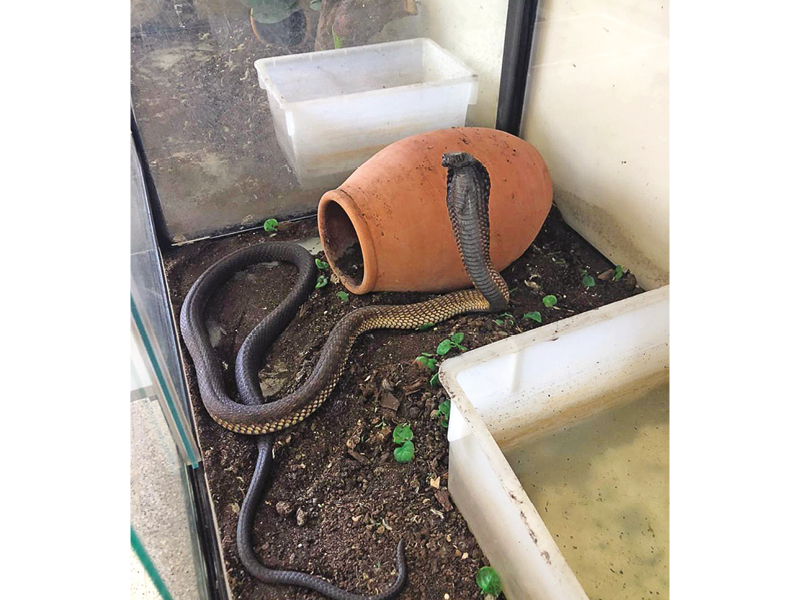 The University of Nizwa has opened a Reptiles and Insects Exhibition to the public. In the making for some time now, on display are 65 snakes representing 17 species, 11 lizards of six species and several poisonous scorpions in 48 cages.

The exhibition at the Natural & Medical Sciences Research Centre of University of Nizwa is open to the public, including students and tourists, offering them a close look at some species of reptiles and insects found in the sultanate.

Ahmed al Busaidi, the university’s snake and wildlife specialist, said, “Snakes are an integral part of the ecology and help maintain the balance of nature. Almost everywhere around the world, snakes have a role to play in the culture and are regarded highly for medicinal purposes. At our centre, we take utmost care to not only understand and study the various species of snakes but also to protect them.”

He informed that the exhibition was in the pipeline for a long time for want of appropriate space. “The exhibition area is spacious now and can accommodate more guests, besides space for cages and display enclosures. While it is open to the public for viewing, it is also a research centre. People can come and view the snakes and also learn about the various species,” Busaidi said.

Among the snake exhibits are pythons, mole vipers, cobras and carpet vipers. The exhibits are representative of Oman’s diverse landscape, including indigenous desert and mountain species.

The cages and display enclosures have heaters to help the reptiles regulate their temperature during winter. “From April until November, the reptiles are active. They are a little lazy now,” said Busaidi.

Similar to hibernation in mammals, brumation is a dormant period for reptiles when their bodies shut down and conserve energy for the coming year. During brumation, a reptile may not eat, drink, defecate or move for several weeks.

During the ongoing COVID-19 pandemic, the number of visitors in a single batch has been restricted to five to ten people.

According to Busaidi, 101 reptilian species have been recorded in Oman so far. Of these, 22 are snakes. Most snake species indigenous to Oman are found in Dakhliyah, Salalah and the Batinah region. Of these, nine are venomous.

For snakebites, Busaidi recommends going to a hospital immediately. Snakebite victims must avoid putting pressure on the bite wound.

“If you are bitten by a snake, do not be nervous. Stay calm and move away from the site quietly. If possible, see the snake to know its pattern and colour. It’ll help the doctor decide the treatment. Do not attempt to kill the snake as that might agitate the reptile further and prompt it to attack in self-defence,” Busaidi said.

Busaidi is also part of a team at the university that studies characteristics of snake venom and using their properties to kill cancerous cells.