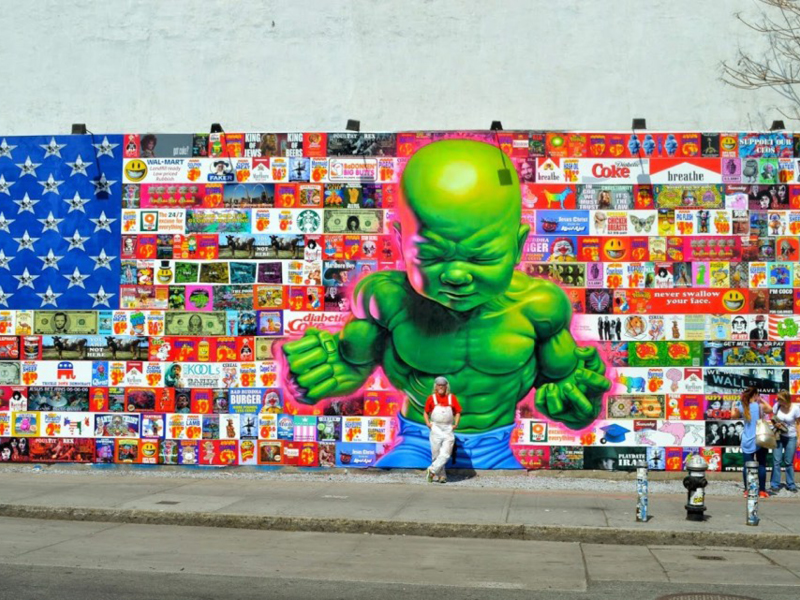 For many of us, art can still feel out of reach. We think of paintings hanging in a museum, chosen by curators and viewed at a price, or private art collectors in possession of influential pieces never seen by the wider public.

In its most ancient form, however, the accessibility of art was essential as a way for civilisations to communicate. Cave paintings depicted the everyday, from hunting to belief systems, and was a way to document history. This remains true even today – art is a way to communicate culture and should exist to be observed, absorbed and appreciated by all.

While some art remains inaccessible – viewable to museum visitors or wealthy individuals only – the history of publicly viewable art has evolved immensely, meaning that the possibilities for everyone to experience it have increased.

The accessibility of art has, however, come under threat again with the mass closures of museums and exhibition spaces as the world was left reeling in the wake of a global pandemic. The importance of ‘art for all’ has never been more relevant.

The ancient origins of graffiti

We know that in its simplest form, graffiti and street art dates back to prehistoric times, with some of the oldest cave paintings created more than 64,000 years ago, painted by a Neanderthal in Cacares, Spain. However, the term ‘graffiti’ can actually be traced to the inscriptions and drawings found on the walls of ancient Rome or Pompeii – used to denote any imagery added to surfaces after their original creation. The first example of what is commonly recognised as graffiti is still in existence today in the ancient Greek city of Ephesus – in modern-day Turkey – which local guides say was an advertisement for adult services.

During the Renaissance, painting on buildings became more sophisticated. Botticelli and Michelangelo are responsible for some of the most widely known examples of publicly viewable art in the world – that of the ceilings and walls of the Sistine Chapel.

While modern day street artists have access to ladders, cherry pickers, and scaffolding, Michelangelo didn’t have the same luxuries of modern technology in 1508. He painted over 5,000 square feet of frescoes over four years, all from a flat wooden platform built out from holes in the wall of the church. While it’s famously reported he painted the ceilings on his back, he actually did so from a standing position – his poor neck!

From vandalism to art

The rise of graffiti – characterised as writings or drawings on walls or other public surfaces without permission – in the 21st century was at first dismissed by critics as an unsightly symbol of vandalism in neighbourhoods. However, the New York City graffiti boom between the 1960s and 1980s helped to establish the medium as a credible art form.

Many now iconic artists made their name in the later stages of the boom. Keith Haring and Jean-Michel Basquiat are now as respected as traditional artists, with museum exhibitions and fashion collaborations around the world. A particular focal point was that of the intersection at Houston Street and the Bowery, kicked off by Haring, which became a place of significant artistic interest with many different street artists featuring their work. Since 2008, the wall has been privately managed and is now available by commission or invitation only.

The 90s and beyond gave rise to global names such as Banksy, further reforming street art’s bad reputation and establishing it as a legitimate art form in its own right. Banksy’s subversive work, which drew on the origins of protest and social message graffiti, gained mass appeal, receiving worldwide fanfare when a new piece appeared.

Today street artists are sought out by brands, politicians and musicians looking to harness their global ‘cool factor’. London-based artist Ben Eine’s signature typeface graffiti has been gifted by David Cameron to Barack Obama, and fellow artist D*Face has collaborated with the likes of Christina Aguilera and Blink-182 to create album cover art.

The art form has become so much of a cultural titan, that this year saw the inaugural London Mural Festival – which joins the likes of Miami’s Art Basel in celebration of street art.

The festival presents London as a canvas with over 40 large-scale murals and artistic events, celebrating street art in the capital. As one of the sponsors, iconic American lifestyle brand Zippo partnered with D*Face to create a mural located on the side of the Theatro Technis Theatre in London’s King’s Cross.

The large-scale artwork is a new take on one of D*Face’s iconic ‘stripe’ motifs. A subversive self-portrait of sorts that combines pop-media and imagery, not only as a satirical comment on content consumption in the 21st century but as a nod to Zippo’s iconic pop culture status and commitment to individual expression.

To highlight Zippo’s role as an unconventional canvas – one that allows you to carry works of art in your pocket – the mural has been scaled down onto a limited edition windproof lighter. The windproof lighter is created using a new 540 Colour decoration process, the latest design innovation from the brand which enables lighters to feature any design, in full colour graphics, wrapped around all edges and surfaces.

In the Middle East, graffiti and street art has, over the past years, become  more prevalent. Street art allows people to view not only graffiti of images and artistic pieces of objects, but to analyse written graffiti and the messages that are meant to be shared within a particular piece.

Each work of street art has unique political, economic, and social factors, illustrating the messaging and content of each work. In Oman, too, over the past few years, street artists have been painting murals and messages in open spaces and walls, underpasses, as well as sections of rugged hills. Most prominent was a recent portrait of His Majesty Sultan Haitham bin Tarik by Abdullah al Sayeagh, an Omani artist from Sur, on Sur port, in South Sharqiyah region.

Street art in a variety of cities, including main sources such as Lebanon, Tehran, and Palestine, has taken on a common attribute of frequent Arabic script and Arabic calligraphy as the main focus of street art pieces. Coined ‘Calligraffiti’, this art form remixes the traditional principles of the Arabic script from past years with the post-modern perspective of nostalgia and visibility of documented works within society.

Street artist El Seed, who has never learned traditional calligraphy, prefers to define it as a form of ‘Calligraffiti’ in which the approach is much more visceral than technical. He says, the Arabic script has this specific thing that gives you so much possibility in designing the letters and that he is in love with this ability to re-form and endlessly innovate. Furthermore, he sees this art form as one which is globalising at a rapid speed, eager to take meanings and display of culture from the city of origin and disseminate it throughout major factions of the world for a specific message or movement.