The taming of Xterra 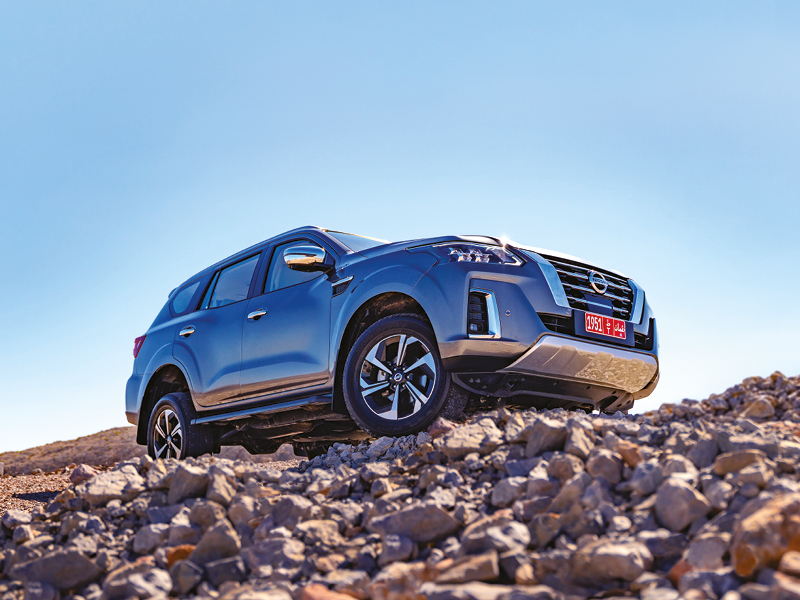 Launched in Oman by Suhail Bahwan Automobiles in December 2020, the 2021 X-Terra could well be considered an entirely new SUV in the Nissan range. There is really no identical physical characteristic, no resemblance at all to the second generation Xterra that was discontinued in 2015. You could be forgiven for mistaking it for a Patrol, albeit a smaller one.

Some of the design elements borrowed from the Patrol become obvious at the first glance. Its front fascia resembles the Patrol’s V-motion grille. It also has C-shaped LED signature headlamps, similar to those on the Patrol. There are similarities at the rear end, too, with the X-Terra’s bumper having squared-off shapes like its bigger sibling suggesting stability and strength.

Additionally, the X-Terra is still built body-on-frame like the Patrol – reinforced for greater rigidity – giving it more ground clearance (243mm) to tackle more varied terrain. But barring the increased ground clearance, the X-Terra’s off-road antecedents aren’t so obvious in its looks. It’s a far cry from the SUV that was originally designed to look better dirty than clean.

However, despite a smaller engine – 2.5lt four-cylinder as opposed to the 4lt V6 in the 2015 Xterra – the SUV doesn’t fuss when you punish it on the twisty undulating roads of Yeti. It’ll only let out a delicate purr when you floor the accelerator as you exit Al Bustan Street gunning the engine to Qantab and further on. The poise and reserve stand out for an SUV billed to ‘go anywhere, beyond boundaries’. Mated to a seven-speed transmission, it produces 165hp and 241Nm of torque.

While these numbers pale in comparison to 261hp and 386Nm of its earlier avatar, the 2021 X-Terra is equipped with an enviable kit for off-roading, including Electronic Locking Rear Differential, Limited-Slip Differential, Hill Descent Control and Hill Start Assist systems. These technologies offered alongside Nissan’s Intelligent Around View Monitor with Moving Object Detection (camera displays split-screen close up views of the front, rear and sides as well as a bird’s eye view of the SUV’s surroundings, while looking out for moving objects) make it a trusty partner off road.

Another feature in the 2021 X-Terra that is rather handy when off roading is the off-road meter that’ll help you see the tilt of the vehicle and tyre angle on a seven-inch TFT display located in the centre of the instrument cluster.

In Oman, all three trims of the 2021 X-Terra – SE, Titanium and range-topping Platinum – are available in 4WD configuration. Features exclusive to the Platinum grade include 18-inch machine cut alloys and a nine-inch user-friendly infotainment system with navigation among others.

The domestication of this once built-for-the-wild creature to city roads has been achieved with driver assists such as Lane Departure Warning, Blind Spot Warning, Intelligent Forward Collision Warning, Rear Cross Traffic Alert, Intelligent Driver Alertness and Intelligent Emergency Braking, all available in the Platinum grade we test-drove.

Creature comforts in the 2021 X-Terra that one can get easily used to include a Bose Premium Audio System, which produces a sound that can touch the heart, climate control for each row of passengers and Zero Gravity second and third row seats. Co-engineered with NASA, these were introduced in the 2013 Altima. The Zero Gravity seats are inspired by the weightlessness of space. Built with 14 different pressure points to put the passenger in a neutral position, the seats’ shape and patented structure provide continuous support from the hips all the way up to the shoulders.

While on the seats, the second row has a remote fold-down feature, while the third row has a single action fold-down to make more cargo space – enough space to lug around kit for a whole soccer team. And at the weekend on a drive to Nizwa and back, you can turn the 2021 X-Terra into a cinema. There’s an optional 11-inch flip down monitor with HDMI connectivity to mirror your smartphone. You couldn’t ask for more in the transformation of Nissan’s maverick adventurer into a family car.

But for all the – inevitable – comparison of the 2021 X-Terra with the discontinued Xterra, its distributor in Oman doesn’t speak of both in the same breath. This is, after all, an entirely new car that will go everywhere and take you there comfortably.