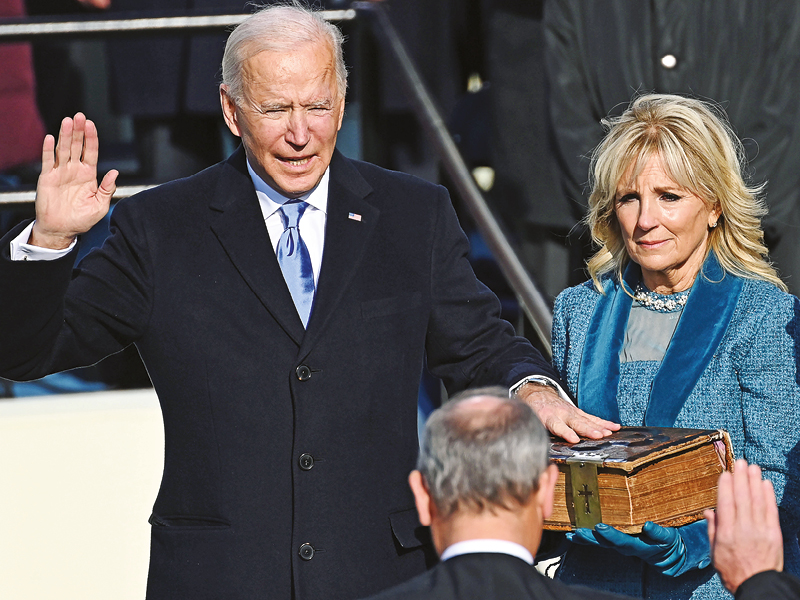 Democrat Joe Biden was sworn in as the 46th president of the United States on Wednesday, ending a tumultuous four-year term in the White House of Republican Donald Trump.

Biden (78) took the oath of office from Supreme Court Chief Justice John Roberts at a solemn ceremony at the US Capitol which was snubbed by the outgoing president and took place in the shadow of a raging coronavirus pandemic.

Kamala Harris too was sworn in making history as she became the first female, first black and first South Asian vice president in the nation’s history.

The new president led a moment of silence for the 400,000 American victims of the coronavirus. “We need all our strength to persevere through this dark winter. We’re entering what may be the toughest and deadliest period of the virus,” Biden said in his inaugural address.

The US faces “a rise of political extremism, white supremacy, domestic terrorism, that we must confront, and we will defeat”, he said on the steps of the US Capitol. Biden used his inaugural speech to send a message to the rest of the world about the US. “America has been tested, and we’ve come out stronger for it. We will repair our alliances and engage with the world once again,” he said, vowing a change from the isolationist policies of his predecessor.

“We’ll lead, not merely by the example of our power, but by the power of our example. We’ll be a strong and trusted partner for peace, progress and security,” he added. In his closing remarks, Biden vowed he will commit to being transparent to the American people. “My fellow Americans, I close today where I began, with the sacred oath before God and all of you, I give you my word. I will always level with you.”

Biden plans to kick off his new administration with orders to restore the US to the Paris climate accord and the World Health Organization, aides said.