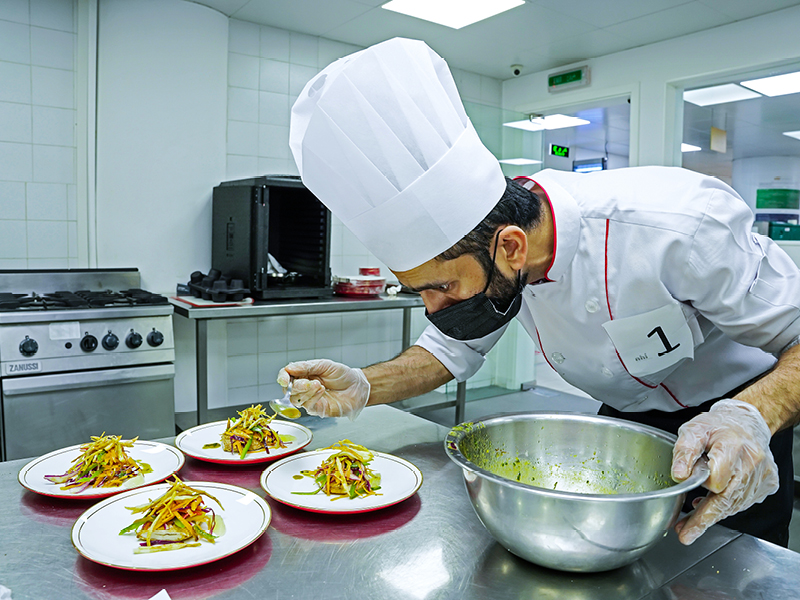 There was a wave of excitement in the kitchen of the National Hospitality Institute at Wadi Kabir, on Monday morning, as chefs belonging to various hotels in Oman, got to experience the thrill as well as anxiety associated with a ‘Mystery Box’ contest – something that has been extremely popular on Masterchef shows on television over the years.

The participants, divided in five teams of three chefs each, had to uncover ‘mystery box’ ingredients and churn out a three-course meal that was subsequently served out to the judges as well as diners in the adjacent students’ restaurant to gain points that defined their prowess in the kitchen within a limited time frame. And, armed with the knowledge and experience from their respective outlets, as well as their own creative bent, most of the participants, came forth with a unique flair that was well received by the organisers as well as provided excellent insights to students of NHI.

This was the first competition held at the institute since the pandemic had kept students within their own homes for many months during lockdowns and restrictions in movement in the city which had been prevalent for the better part of 2020. While many kept abreast of learning via online classes, some of them also participated in virtual cooking lessons delivered by their tutors at the institute from time to time.

The ‘Mystery Box’ challenge was set up between participants from hotels and other hospitality branches such as the military and the Diwan of Royal Court. The objective of the competition was to create a competitive spirit amongst the chefs in Oman and to help grow interest, particularly amongst the Omani community in the job of a chef, Robert MacLean, principal of NHI said.

The Chef’s competition at Gulf Chef School is a quarterly competition organised by NHI and teams have the opportunity to showcase their skills by turning regular food ingredients into premium menu items.

Each team consisted of two chefs and one waiter. The teams were given mystery baskets which had a selection of protein and vegetables. The challenge before each team was to create a three-course menu and hand in the menu to the organisers by a set time. They were then given three hours to prepare the meal.

Two professional judges from the Oman Chefs Guild – the key sponsors of the contest – later declared their verdict after all five teams came forth with outstanding dishes for all three courses, much to the delight of the judges and the diners.

The winner of the competition was the team from Sheraton Oman hotel comprising Anil Sunar and Zahir Fadhil al Hajri (both chefs from the hot and cold kitchens respectively) and Mina Abdulmajid Labib from F&B service. They created a stunning ginger fish broth with handcrafted steam dumplings and carrot noodles to start with, stuffed chicken roulade with creamy spinach, onion puree, confit potato and roast peppers for main course, and millie-fuille of caramelised apples for dessert.

Mina Abdulmajid Labib, from the winning team disclosed that good coordination and cooperation were the hallmarks of their team which helped them bag the prize. “In a mystery basket challenge you do not know what will be given to you – so no planning works. However, we were able to play around with ideas on the spot and execute them well by dividing the tasks. Three hours were good enough for this challenge which was organised in a very professional manner,” he said.