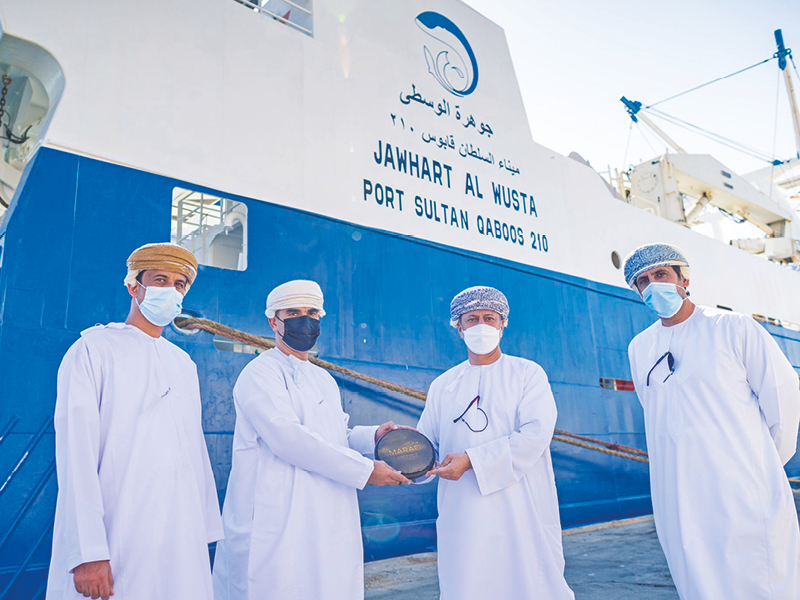 Al Wusta Industries Company (AWFI), an affiliate of Fisheries Development Oman (FDO), marked the commissioning of a new vessel Jawharat al Wusta in  its fleet which docked at the Port Sultan Qaboos in Muttrah on Monday.

The vessel takes the fleet at AWFI to three with a total production capacity augmented to 70,000 tonnes per year of small pelagic fish.

The company will invest in the vessel to operate in the high seas outside the traditional fishing areas in accordance with the approved environmental and commercial standards, which will contribute to raising fish production in the sultanate, support economic diversification, and enhance the level of competitiveness of Omani fish products in global markets.

Jawharat al Wusta is 99m by 16m and has a capacity of 1,600 tonnes. It is distinguished for its hi-tech equipment and designed to serve as a fisheries processing, freezing and packaging unit. The vessel comes as a continuation of a number of projects carried out by FDO and its subsidiary companies, includingshrimp cultivation projects in the wilayats of Jalaan Bani Bu Hasan and Jalaan Bani Bu Ali, and a shrimp aquaculture project in Barr al Hikman.

According to the Ministry of Agriculture, Fisheries and Water Resources, the total quantity of fish landed in the sultanate was 608,000 tonnes at the end of October 2020. Artisanal fishingcontributed 580,000 tonnes of fish, while coastal fishing contributed about 3,000 tonnes and commercial fishing around 25,000 tonnes.