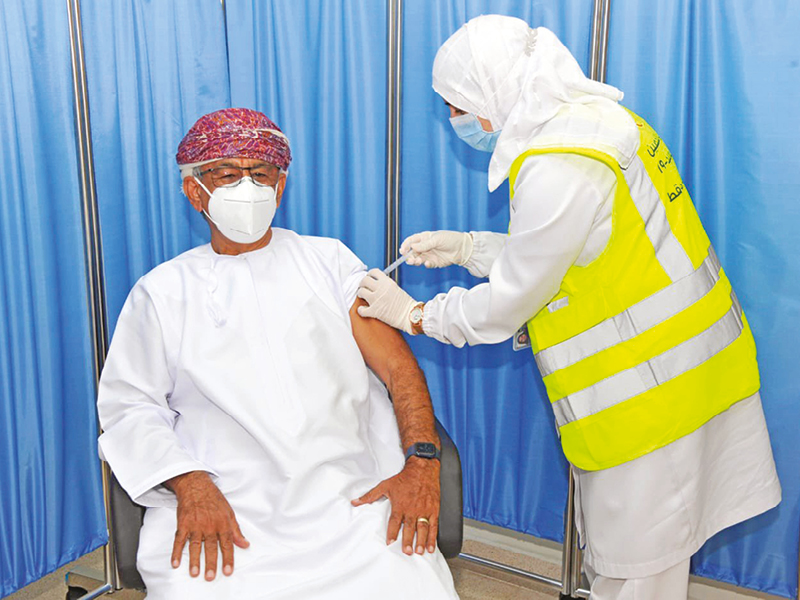 Following the rollout of the second dose of COVID-19 vaccines, officials and others who have taken the shot have reiterated that it is safe.

On Sunday, the Ministry of Health (MoH) rolled out the second dose of the vaccine in line with the schedule of the national campaign for immunisation against COVID-19 for those in the target group who received the first dose in the few past weeks.

H E Dr Ahmed bin Mohammed al Sa’eedi, Minister of Health, who received the second dose of the vaccine on Sunday, said the Pfizer-BioNTech vaccine that is being administered in Oman is safe and effective.

“Some hesitated to take the vaccine, which is natural, but it is not based on scientific information. It is related to rumours and false information. If I was not convinced of the vaccine, I would not have allowed it to enter the sultanate. So far, more than 20mn people worldwide have received the Pfizer vaccine and have not shown any serious symptoms,” H E Dr Sa’eedi said.

He informed that vaccination campaigns in Oman are well-documented and the sultanate was described in 2016 as the first among 127 countries in administering vaccines. “We use vaccines only after reviewing the studies and clinical trials, and registration of vaccines and medicines in the country of origin and its use,” he said.

According to the World Health Organization, COVAX, the global initiative to ensure rapid and equitable access to COVID-19 vaccines for all countries, has made arrangements to make nearly 2bn doses available to 190 participating economies in the first half of 2021.

Reiterating the safety of the vaccine, one of the recipients of the vaccine Saleh Zakwani of Apex Media, said he was privileged to get the first shot last week and looking forward to the second one. “Over the last few months, we have seen how the pandemic wreaked havoc. Everything including our social life, economy, businesses and travel was severely affected,” Zakwani said, describing the vaccine as the need of the hour that’ll ensure a world that is safe and secure.

“I saw very few people availing the service from the Ministry of Health, so I urge everyone eligible to opt for it. I haven’t had any side effects. The vaccines are safe and important at this point in time,” Zakwani added.

Another recipient Dr E B S Ramanathan, senior consultant for sports injuries at Muscat Private Hospital, too vouched for the vaccine’s safety. He took the shot three weeks ago. “Apart from minor skin rashes, nothing happened to me. I have continued to work. I urge everyone to go for it, not only for themselves but the community at large.”

Echoing similar views, Fatma al Shamsi, who got her second dose on Sunday, said, “Before my first dose, I was worried but three weeks passed and nothing happened. Many of us take rumours seriously. After officials assured the vaccine’s safety, I was convinced about it.”

In an indication of the control over the pandemic, MoH on Sunday announced 526 new cases of infection in the last three days (daily average of 175), taking the total to 131,790. The number of deaths reported during this time was three. ‘The number of recoveries has increased to 124,067, while the number of deaths has reached 1,512,’ the ministry said.

The number of patients hospitalised has also dropped significantly. ‘Currently there are a total of 69 COVID-19 patients admitted in hospitals, including 13 admissions in the last 24 hours.’

Of the total number of patients hospitalised with the virus, 21 are in ICUs.