Tee-off to a fresh start 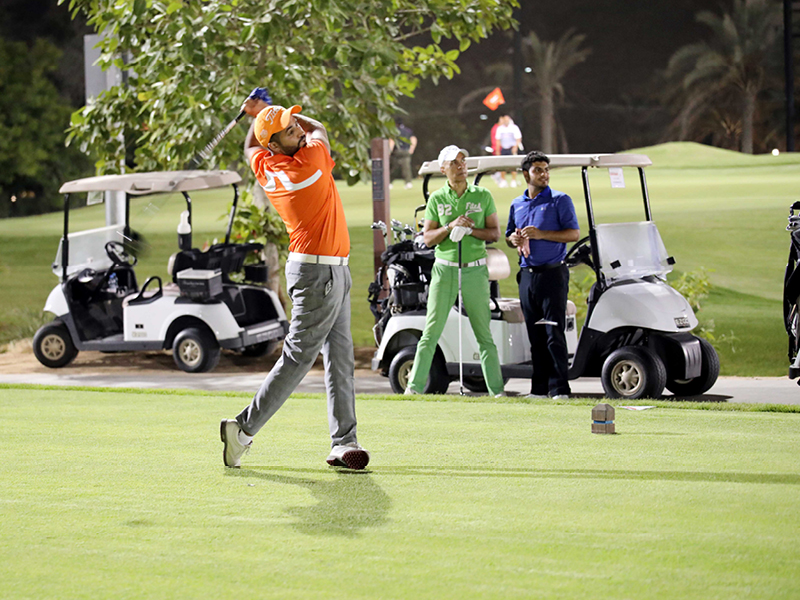 A 19 year old watched his close friends decline an invitation to go out into the sea on a luxury yacht for a fun-filled trip. A confused Faiz Mohammed Riaz was keen to know why. And the reply he got – ‘to play a round of golf’.  He couldn’t believe his eyes that four of his teenaged friends had decided against a sea trip with jet ski rides, also an added bonus.

As curiosity grew further, Faiz decided to check out why is the game so interesting. One day, he decided to go out along with his friends to a golf course. As his friends went out to play, he was told to hang out at the driving range and try out.

Hitting the balls on the range gave him a strange joy and soon he realised that he had fallen in love with the game.

Subsequently, he was spending hours and hours on the driving range, which soon turned into days and months, and then years.

From a rookie who shuddered to go onto the fairways and enjoy putting on the greens at one time, Faiz has come a long way over the past decade. The journey from a rookie to finally being selected into the Oman national golf team recently has itself been like a session over 18 holes for him.

Be it hitting birdies and eagles to carding bogeys, or getting his first tee shot long to firing it into hazards, it has all been there over the past five years.

But now, it is time for him to climb a step up and raise his game further having been named into the national team.

For the 30 year old, the desire and determination has borne fruit  since he picked up a club on the driving range in Dubai in 2009.

The inclusion of Faiz will bolster the squad, which has been spearheaded for long by experienced Oman’s No 1 golfer Azaan al Rumhy.

The other members of the squad include Ahmed al Balushi, Badar al Amri and Mohammed al Busaidi.

Faiz’s inclusion is expected to help Oman provide competition to their much superior rivals at the GCC and Arab events.

Faiz said his ‘love for the game’ grew as it is ‘an individual sport and no one else can be blamed for the performance’.

“I like to own up responsibility and this game taught me to own up things – be it your own mess or glory. I got hooked up with the game as the idea of competing against myself appealed to me. It made me work harder as I went to the range daily to beat myself, and for hours I sweated it out trying to achieve my goal.

“My plan was to enter the tournaments only when I am good enough to compete and just not make up any numbers in the field. When I entered my maiden tournament in the UAE in 2013, I was very nervous. But once I took part and performed well, there was no looking back for me. I was soon a regular at the  domestic competitions in Oman after that.”

Born in Al Ain, UAE, Faiz moved to Oman when he was 13 and studied in British School Muscat before completing his college education in Dubai. He joined his family business in 2014 and since then has been an active golfer on the domestic golf circuit.

Faiz has to his credit some of the biggest wins in domestic tournaments, which include Black Tee Challenge, considered to be one of the toughest, Xerox Corporate Challenge and Ghala Golf Club Championship.

Having received Omani citzenship few months back, Faiz was picked by the OGA for the national team based on his performances in the recent past.

Faiz, who is also a board member of the Ghala Golf Club,  is determined not just to give his best on the course but is also keen to support the OGA through corporate backing. His company, Mohammed Riaz and Partners, has sponsored many golf tournaments in the past and is now involved with OGA on a project that is expected to give a boost to young Omani golfers.

Recalling some of his most satisfying victories, Faiz said, “Obviously, winning my maiden win in 2015 at the Xerox Corporate Challenge, which was followed by victory at the Dubai event of the same series, was a highlight. Over the years, I have won nearly 60 trophies but the biggest title I lifted was the Black Tee Challenge trophy at the Al Mouj Golf Course.

“The back-to-back titles at the Ghala Golf Championship in 2018-19 was another achievement and also the successive triumphs at the prestigious H H Sayyid Qais and H H Sayyid Abbas memorial tournaments.”

Looking forward, Faiz, who has his family roots in Pakistan, said that ‘to play along an experienced teammate like Azaan will be huge’.

He added, “We will try to compete against each other as it will bring the best out of each other and that will hopefully serve the interest of the national team in the future.

“The responsibility of playing for the national team is huge and I want to increase my training sessions by 200 per cent. With a national team coach to guide us, I am sure of developing my game further.”

Faiz thanked his family for their strong support and is now eyeing his first podium finish as an Omani golfer at the national tournament later this month.

Commenting on his inclusion into the national team, OGA general secretary Ahmed al Jhdhamy said, “Faiz brings in lot  of experience and his presence will add more depth to the squad. He has shown his dedication and determination by achieving good results over the past few years and at OGA, we always look for golfers who play with passion. Faiz is passionate about his game and he prides himself to be a national team member.”

As for Faiz himself, he said that ‘his inclusion in the national squad is the biggest moment yet in his playing career’.

“Representing Oman is the highest honour and I am hopeful that I will be able to deliver good results and bring glory for the sultanate,” said Faiz as he signed off.