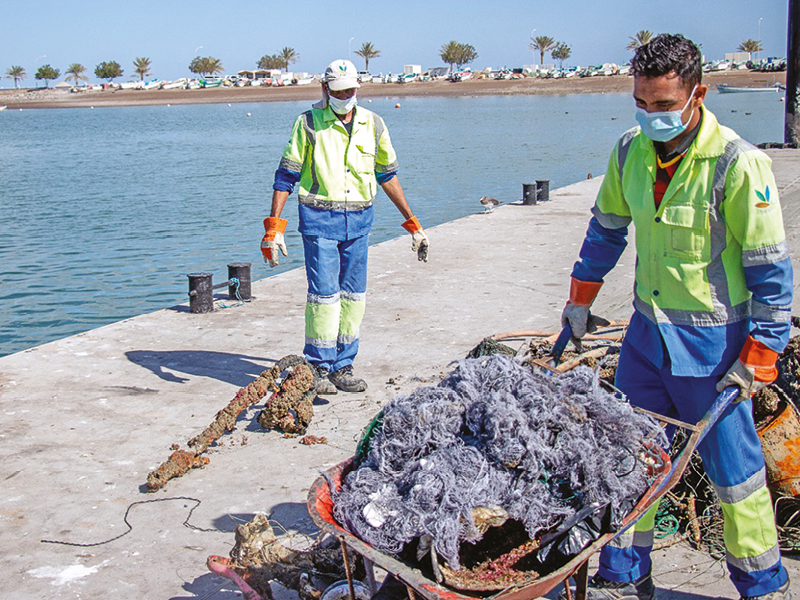 To clean the marine environment and protect coral reefs, Quriyat Divers, in cooperation with the Ministry of Agriculture, Fisheries and Water Resources, the Environment Authority and the Coast Guard, is conducting a series of clean-up campaigns.

The most recent of these clean-ups was held on January 9 in Quriyat Port with the participation of 40 volunteers.

Speaking to Muscat Daily, Juma Khamis al Amri, head of Quriyat Divers, informed that this was the ninth clean-up dive that the team had organised.

“The latest dive in Quriyat Port resulted in the removal of 800kg of fishing nets, iron pieces, plastic and empty cans. The dive started at 8am and ended at 1pm.”

According to Amri, the clean-up in Quriyat aimed at celebrating the Omani Environment Day observed on January 8 annually, spreading awareness on the importance of preserving the marine environment, and encouraging volunteer work among people in the wilayat of Quriyat.

“Prior to physically removing the waste, some members of the team did a reconnaissance dive at the site and wrote a report. Later, the report was discussed at a meeting and work delegated to each member,” Amri said.

Quriyat Divers was established in January 2019 and it conducted its first clean-up dive in Ras Abu Dawood in Quriyat to remove 800kg of nets, anchors and ropes.

The team is enthused to continue the important work of cleaning Oman’s seas. “We hope fishermen abide by fishing laws. They shouldn’t discard unwanted nets into the sea,” Amri urged.