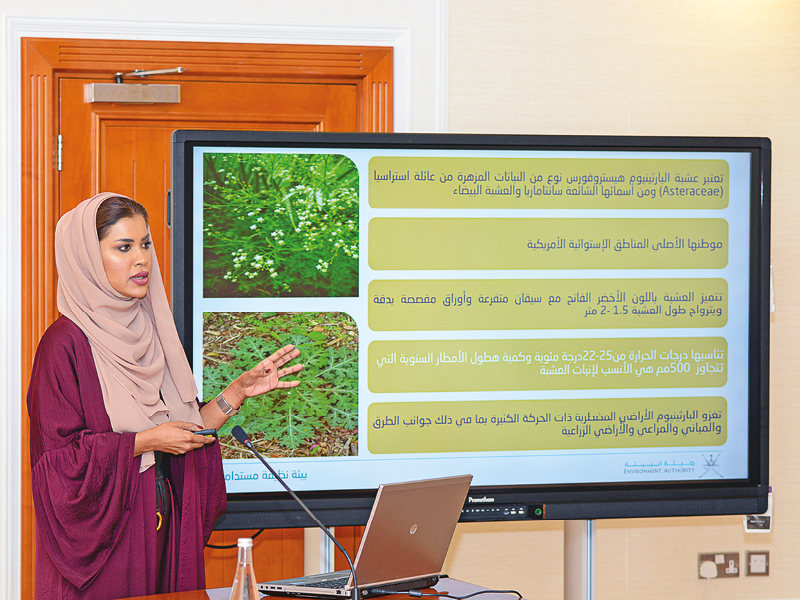 Dr Thuraya al Sariri from the Environment Authority said that  Parthenium, a harmful and invasive species, was registered for the first time in the Governorate of Dhofar in 1998 when a survey was conducted on indigenous plants of the governorate. She said that the spread of Parthenium leads to the degradation of natural ecosystems. “It is also responsible for severe human and animal health issues, such as dermatitis, asthma and bronchitis, and agricultural losses, besides a great problem for biodiversity,” she said.

Dr Hamdan bin Salem al Wahaibi, from the Ministry of Agriculture, Fisheries and Water Resources (MAFWR), gave a visual presentation on the mesquite trees and the efforts being made to limit its spread, including the national campaign to remove it.

Eng Saleh al Saadi from the Environment Authority gave a visual presentation on invasive birds, the species that are introduced to an environment other than their original environment, and which threaten natural habitats, ecosystems and local species. “These birds are considered one of the main threats that lead to the loss of biodiversity in the world, negatively affecting the economic, social and environmental aspects,” he said.

Dr Abdullah bin Bashir al Mongi, from the Ministry of Health, gave a visual presentation on the Aedes aegypti mosquito. The meeting issued several recommendations such as forming national working groups from the relevant authorities to monitor and document all invasive bird species in the sultanate and work to prepare an integrated action plan to combat the bird species.

The groups will include specialists from the Ministry of Higher Education, Research and Innovation, MAFWR, Royal Oman Police, Office of the Minister of State and the Governor of Dhofar, Sultan Qaboos

The meeting also recommended activating the role of the private sector in finding innovative solutions and investment opportunities to benefit from mesquite trees in the manufacturing industries.