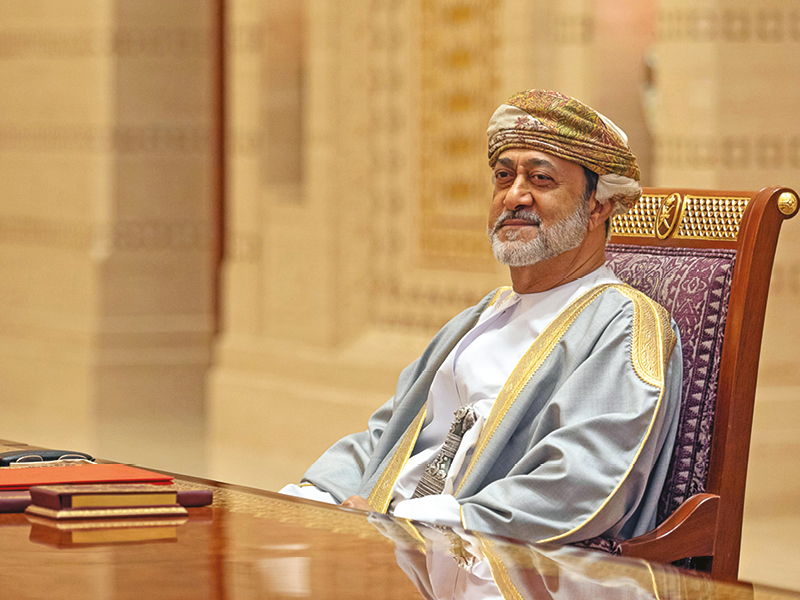 His Majesty Sultan Haitham bin Tarik presided over a meeting of the Council of Ministers at Al Barakah Palace on Monday.

At the outset of the meeting, His Majesty the Sultan thanked and praised Almighty Allah for the bounties which He bestowed on Oman and its people.

His Majesty the Sultan prayed to Almighty Allah that this new year, 2021, will be a year of blessings and bounties on the sultanate and its citizens and residents.

His Majesty the Sultan commended the prominent achievements made in Oman, thanks to the wise and farsighted leadership of the Late His Majesty Sultan Qaboos bin Said.

His Majesty the Sultan pointed out that Monday, the Accession Day anniversary, represents a new start towards the blessed renewed march of the renaissance, in confident steps forward to a brighter future that is pulsating with emotions of dignity and belonging to this homeland that is dear to all citizens. He also noted that it is a day of renewed vigour marching towards the accomplishment of further achievements across all sectors in a manner that meets the expectations and aspirations of all.

In the context of His Majesty the Sultan’s attention and follow-up of the government’s performance in all units of the State’s Administrative Apparatus, the Basic Law of the State has dedicated a full chapter to the follow up of progress of work in government units.

In keeping with His Majesty the Sultan’s conviction in the significance of the role of the Council of Oman and in its valuable contribution to the comprehensive march of development, a special law will be promulgated for the Council of Oman to define its roles, prerogatives and mechanisms of functioning.

Within the context of His Majesty the Sultan’s attention to opinions of citizens, he has reiterated the importance of ministers and undersecretaries’ meetings with citizens and all beneficiaries of the services offered by their respective units.

The officials concerned are required to explain the programmes and procedures to be undertaken by the government, notably the policies, services and mechanisms due to be implemented.

His Majesty the Sultan also underscored the priorities of the next stage, with emphasis laid on the employment of citizens in the public and private sector.

His Majesty the Sultan gave directives to the departments concerned to undertake steps necessary for the employment of citizens in the different institutions of the state in accordance with the actual needs, while at the same time working in cooperation with the private sector so that it could shoulder its role in employment and encourage it to accommodate job seekers in its different sectors.

In this respect, His Majesty the Sultan commended the efforts exerted by these departments.

He exhorted all to stick to the procedures governing the supply of these vaccinations.

On the Arab Gulf front, His Majesty the Sultan hailed the outcome of the recent GCC summit held in the sisterly Kingdom of Saudi Arabia which, he said, helped make the conference a success.

His Majesty the Sultan commended the positive results achieved, including understanding among GCC states.

He also lauded the leading role of the late Emir of Kuwait, Sheikh Sabah al Ahmed al Jaber al Sabah, in supporting the GCC march and achieving the aspirations of its peoples.