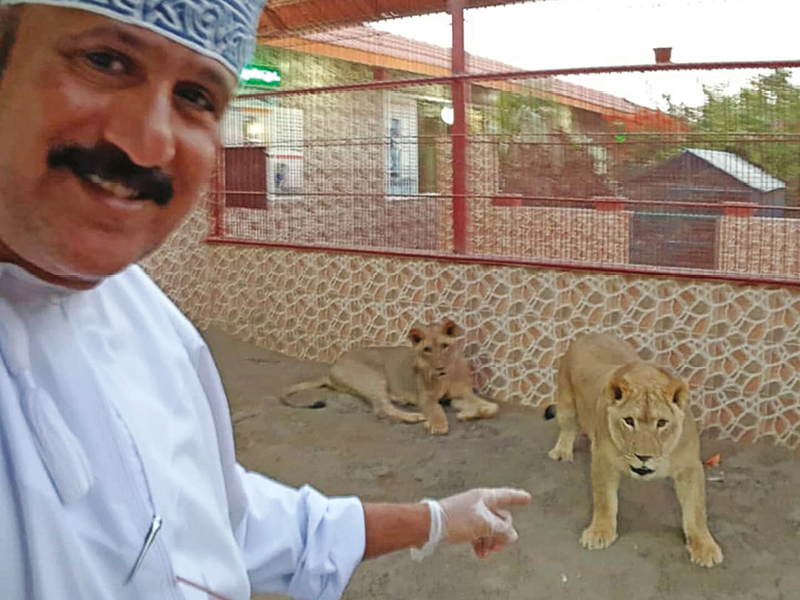 The owner of the An Naman Zoo in Barka has refuted rumours suggesting the death of Simba, the lion, in his menagerie. Ahmed al Balushi described the rumours as ‘fake news’.

Balushi clarified that the two lions in his menagerie – Simba and Sirabi – were poisoned by unknown miscreants two years ago, following which they received immediate treatment by qualified veterinarians. Though Sirabi recovered, the poison affected Simba’s nervous system. The big cat’s movements slowed and it was often wobbly. “But with regular monitoring and medication, Simba made a full recovery to be playful again,” Balushi said.

He called the rumours of Simba’s death ‘distasteful, irresponsible and hurtful’. “The malicious people spreading these rumours will never ever understand how much I love my animals; as much as my own children. I have never mistreated any of them in all these years,” he said.

“I have worried and cried over their illness and injuries. I always use the best food and medicines, and staff members treat each animal with love and respect. These are just rumours on social media. I invite people to visit Simba and Sirabi and see for themselves.”

Balushi informed that the zoo recently welcomed two tigers – Shathoo and Kapooth. Both female, the cubs are fed half a kilogram of chicken each every three-four hours. “When they were babies, they were fed special milk flown in from the US. Shathoo and Kapooth are kept in air-conditioned cages. I can never mistreat my animals,” Balushi reiterated.

The messages posted on social media suggested the animals in An Naman Zoo are ill-treated by zookeepers resulting in Simba’s death recently. Hate messages and accusations followed, in particular about malnutrition of the animals.

Social media strategist Vinod Raghavan, who is a regular visitor to the zoo, said, “It is very important to clarify such false information. The animals are well cared for. Balushi has invested his entire life to these animals and such fake news undo his efforts and cause.”

He added that the zoo is a great place for children to relax and learn about animals.