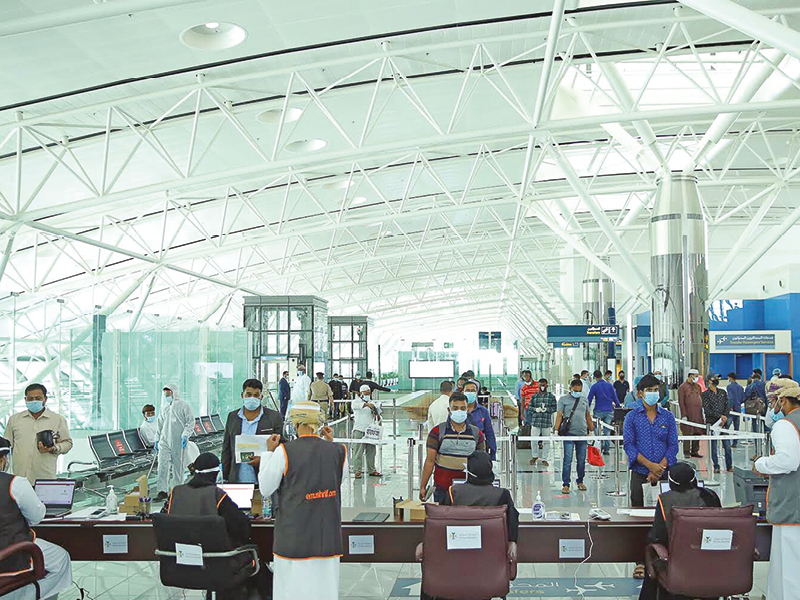 Long queues, multiple paper verifications and medical check-ups are the new norm at Muscat International Airport. Though these processes take time, the strategically located assistance and helpdesk kiosks in the airport are efficient and facilitate smooth flow of passengers.

Besides passports and tickets, passengers arriving at Muscat International Airport must also present PCR test reports from their country of departure, insurance policy, payment receipt of pre-booking for COVID-19 in Oman, and have the Tarassud+ app downloaded in their mobile phones.

Anup Bhalotia, a passenger from New Delhi who arrived in Muscat on a new visa, said, “I have been in Oman for the last few years and flying in and out was always smooth. But now with so many verifications, I took over three hours to pass through the immigration gates.”

The formalities following immigration took him two more hours before he could finally exit the airport.

Besides the new clearance procedures, the requirement to maintain social distancing, priority to senior citizens, the sick and women with children, and several flights landing at the same time also add to delays.

An airport official said, “There was panic when the airports suddenly closed for a short time. With PCR test reports now required from passengers in Oman as well as their destination, we have had many queries. We managed to clear the confusion with instructions in all of our social media accounts.”

About the Tarassud+ app, the airport official said it has “a very smooth, clean interface” and is easy to use.

“We understand people are rushing back to be with their families or at work because of the fear that airports will again be closed for an indefinite period of time like last year. We are giving our best to our passengers to facilitate an easy entry.”

Following immigration, another long queue for the PCR tests is witnessed at Muscat International Airport. There are over 20 counters for swab collection. Passengers are required to pre-book the test through emushrif.om (costing RO25) and produce a receipt at the counter.

Said Khalfan, a passenger from Uganda, said, “I arrived at 3.45am on Emirates. I was tired after the long flight. I couldn’t believe my eyes when I saw the long queues at immigration. Only two counters were open for stamping passports of all these passengers. Some passengers were old and couldn’t stand for long; others were tired and looked for a place to sit.”

Khalfan took four hours to have his passport stamped. “I was traveling with my 15 year-old sister; she was in tears – too tired standing for four hours. Many people decided to just squat on the floor. I asked for help to go through but had to be patient as many other people were also pleading for help.”

Following immigration, Khalfan queued up for close to two more hours for the PCR test. “It took me six good hours to be out of the airport, almost the same as the duration of my flight. I’m just thankful it’s over,” he added.

Riyaz Abdullah, a passenger from the southern Indian state of Kerala, said, “I could not make the payment online, but officers were helpful. I paid with my card here. We could not use the e-gates. These are probably not operational now as a precautionary measure.”

After verification of papers for medical insurance and receipts, passengers need to queue up for a final time for the tracking bracelet, before exiting the airport.