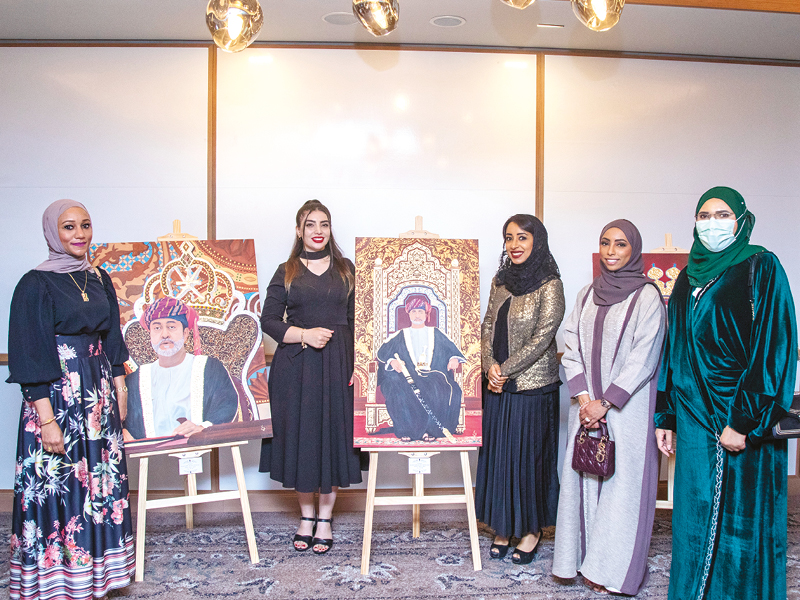 Inspired by the personality of His Majesty Sultan Haitham bin Tarik, Iranian artist Nakisa Samadi has created a collection of graphic artworks some of which she exhibited in an exhibition last weekend.

Her first exhibition in Oman, it was opened by chief guest Sayyida Hujaija al Said.

The two-day show at Mysk by Shaza in Al Mouj Muscat also aimed at shedding light on the diplomatic ties between Oman and Iran. “The two countries have enjoyed good neighbourly relations since many decades,” Nakisa said.

She said Oman’s efforts in promoting peace and harmony are recognised internationally.

“Hence, my attention as an artist directed me to who is leading this country – His Majesty Sultan Haitham bin Tarik.”

Following a thorough study of the art and culture of Oman, the lives of both the Late His Majesty Sultan Qaboos bin Said and His Majesty Sultan Haitham bin Tarik, and their interest in cultural matters, Nakisa conceptualised the exhibition to express her admiration and devotion to the two towering personalities.

“At the exhibition, what struck me immediately was Omanis’ interest in art and culture, and their unified love and loyalty for their leader His Majesty Sultan Haitham. Their attention to art technique and style surprised me,” Nakisa said.

“I would like to thank all Omani people for their lovely reaction to my artworks.”

Nakisa employs specialised graphic techniques and hyperrealism in her pursuit of art. For this particular exhibition, she used acrylics, patina and golden leaf – among other media – over graphic images to create the collection on His Majesty Sultan Haitham to mark the 50th National Day of the sultanate.