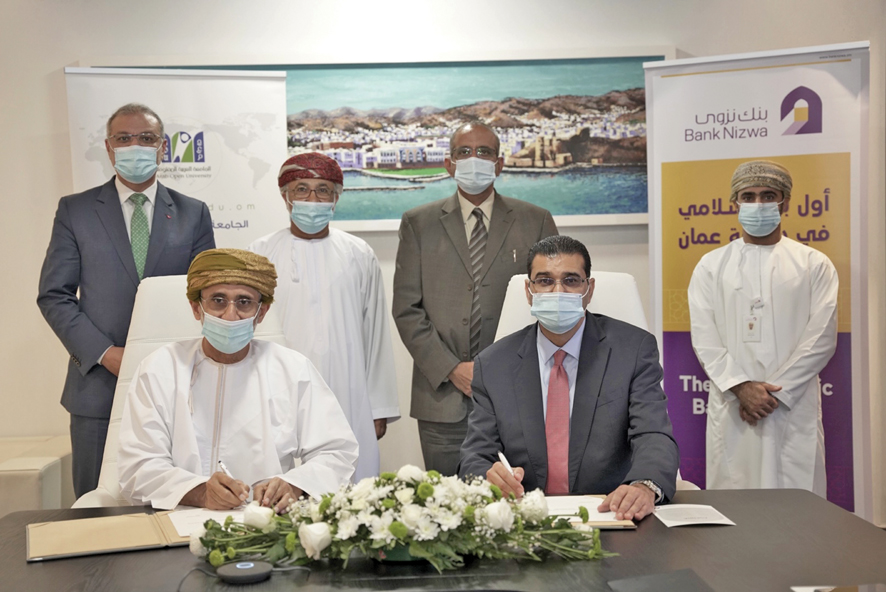 Bank Nizwa recently signed an agreement with Arab Open University (AOU) to finance the construction of their new campus in Oman. The signing ceremony was held at the Bank Nizwa head office in Muscat. With education being a primary focus of the Oman’s Vision 2040, Bank Nizwa understands the importance of having a professionally skilled workforce to drive the economy and thereby attain prosperity, the bank said in a press release.

“One of the key drivers of success in a country is defined by the quality of education provided to its youth who are the future of the country. By supporting such ventures that are dedicated to the advancement of skills of our youth, we will continuously have local talents that will be professionally geared to take on new initiatives and contribute to the national economy,” Bank Nizwa CEO Kayed said.

He added, “Education is one of the key sectors that the Oman’s Vision 2040 focuses on and Bank Nizwa is committed to being a vital contributor to the nation’s growing economy through strategic partnerships like these.”

To build the campus, Bank Nizwa has signed a financing deal and the university has received a land allocation from the Ministry of Housing in South Mabela with a total area covering 37,850sqm. The new Arab Open University falls under the Arab Gulf Programme for Development (AGFUND) which is a regional organisation established in 1980 by the initiative of His Royal Highness the late Prince Talal bin Abdul Aziz and the support of the leaders of the Gulf Cooperation Council.

The first phase of the Arab Open University was launched in October 2002 and it started in Oman in February 2008. With 15 branches and centres in nine Arab countries, it aims to reach all Arab countries.

Established as a non-conventional academic institution, the Arab Open University has been reaccredited by the Open University Validation Service of the Open University in the United Kingdom for a period of five years (2017-2022) for the fourth time. The AOU has signed a series of memoranda with a number of international universities to offer academic programmes required in the labour market.

On completion of the project, the university will help students enhance their skill set, increase knowledge and attain internationally acclaimed degrees, therefore, giving the country local talents in various sectors who possess the necessary expertise to take on leadership roles.