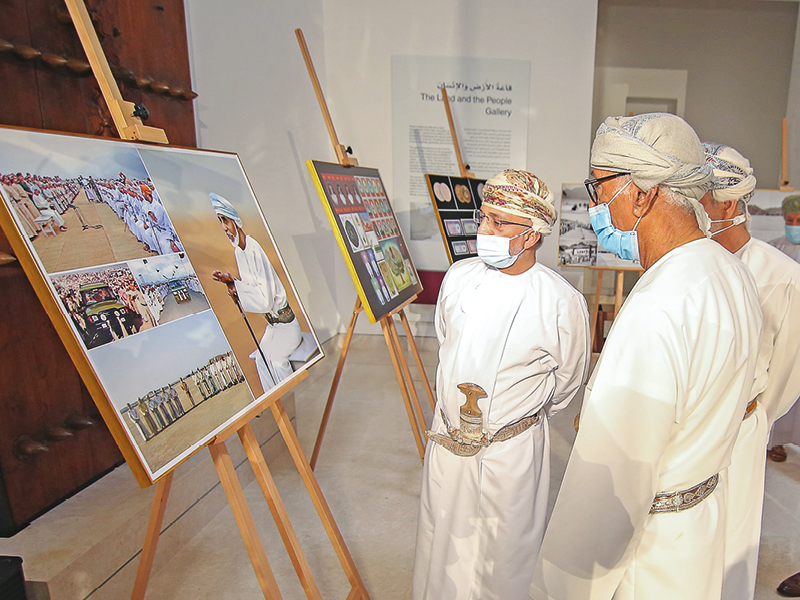 Under the auspices of Salim Mohammed al Mahrouqi, Minister of Heritage and Tourism and Chairman of the Board of Trustees of the National Museum, the encyclopaedia ‘Oman Since the Beginning of Time, an Illustrated Historical Record’ was launched at the National Museum on Wednesday. The launch event was attended by several senior officials.

The encyclopaedia comprises of four volumes documenting Omani history over a period of 7,000 years. The volumes have been published as per the directives of the late Sultan Qaboos bin Said under the supervision of his advisor for economic planning affairs Mohammad al Zubair. The National Museum is one of the main supporters and contributors to this project.

The 1,792-page encyclopaedia includes 5,188 images that were selected from over 150,000 collected from various sources in an attempt to rewrite Omani history objectively. The aim is for the encyclopaedia to serve as an accurate reference for scholars and researchers. The authors of the book were inspired by the directives of the late Sultan to the students of Sultan Qaboos University in May 2000. During a visit to the university, he spoke in detail about the misrepresentation of Oman’s history throughout time. He called on history scholars and researchers to not take what is written as factual information, but instead analyse, research and hold discussions to understand more about what happened and thus be able to correct the nation’s history.

Commenting on the compiling process, Zubair, said, “I discussed Oman’s history in several meetings with the late His Majesty. He spoke about the need to refine the general consensus, which set us on the path to develop a comprehensive study for this encyclopaedia. With the results of this study arose the need to create an illustrated record of our history in order to eliminate doubts and convey the truth. The first challenge was to obtain the relevant images of this period. We had to rely on ancient monuments, findings and inscriptions that were discovered in various parts of the sultanate, as well as historical sites that we studied, documented and took pictures of. The scientific committee assisting in the compilation also drew up an accurate list of historic accounts of the various regions, and writings of reliable historians and visitors to Oman.”

“These writings were collected, analysed and documented. The information thus extracted could be considered factual and not based on imagination or exaggeration. The information was then transformed into infographics, to make it easily accessible for a larger segment of readers,” Zubair said.

The encyclopaedia uses a variety of illustrative styles, including anecdotes, chronology, images, poetry, colours, visual images and illustrations based on scientific evidence and archaeological findings to display content. It uses as little text or commentary as possible to avoid misinterpretation. Instead, readers are called upon to use their imagination to explore and understand the history of Oman.

The four volumes of the encyclopaedia narrate Oman’s history according to a precise chronology. The first volume tells the story of ancient Oman, before the introduction of Islam. Shaped by geological forces over 700mn years ago, the nation’s natural diversity in terms of climate and resources initially allowed for primitive human activities. In subsequent eras, industrial, commercial and navigational activities developed that, together with intellectual, cultural and urban development, were heavily influenced by peaceful and hostile tribal relations.

The second volume covers the period from the introduction of Islam, around 629-630 AD, until the ascension of the late Sultan in 1970. Manuscripts and pictures tell the story of a civilisation that made valuable contributions in the fields of literature, language, law, medicine, architecture, science, arts, navigation, trade, governance, politics and others. It also showcases the different families that ruled over Oman during the Islamic and modern eras, up to the Al Busaidi dynasty, and the mark they left on the history of modern Oman.

The third and fourth volumes cover the era of the modern renaissance until today, with the ascension of His Majesty Sultan Haitham bin Tarik on January 11, 2020. Starting from July 23, 1970, deemed the beginning of Oman’s modern renaissance, they provide insight into the development of Oman and touch upon achievements in fields such as culture, economy, society, politics and international relations. The volumes also showcase Oman’s qualitative leap in these last five decades.

Concluding the introduction he wrote for the encyclopaedia, Zubair said, “It is truly a great honour to have been able to transform the wish of the Late His Majesty Sultan Qaboos, as reflected in his speech in Sultan Qaboos University in 2000, into reality. He spoke about the need to conduct research and document the history of Oman with facts and imagery. I believe that this encyclopaedia will be the beginning of other similar projects that rewrite the history of Oman accurately. I hope that it will help Oman’s youth get a valuable insight into the ancient and modern history of their country through interesting and engaging content.”