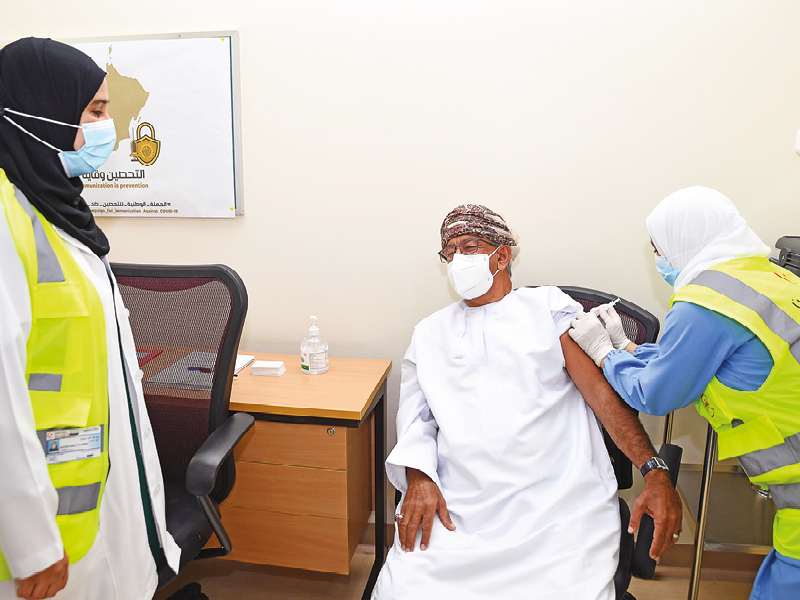 The event at Al Seeb Specialised Polyclinic was held in the presence of senior officials, including undersecretaries and healthcare workers.

H E Dr Sa’eedi was the first person to be vaccinated, followed by the representative of World Health Organization in Oman, Dr John Jabbour, a number of healthcare workers and members of the community.

“We are happy to launch this national campaign. The ministry has distributed vaccines to various wilayats. There is a committee to oversee the distribution of the vaccine. Vaccines will be given to both citizens and residents according to a distribution plan prepared by the ministry,” the minister informed.

“The second batch of vaccines of around 28,000 doses is expected to arrive in January. More shipments will follow. Two doses of this vaccine are required to be administered 21 days apart. The first batch will be administered to 7,500 persons.”

At the launch ceremony, H E Dr Mohammed al Hosni, Undersecretary for Health Affairs in the Ministry of Health (MoH), confirmed that a working group specialised in the field of vaccines, which was formed by a ministerial decision, selected the vaccine based on scientific evidence.

H E Hosni informed that prior to provision of the vaccine, priority groups for immunisation were identified and approved.

The WHO’s Dr Jabbour, who was the second person to take the shot, pointed out that his taking the vaccine soon after the health minister is confirmation of its safety.

On the vaccine’s side effects, Dr Saif al Abri, Director General of Disease Control and Surveillance, clarified that symptoms manifested following the shot range from pain, redness and swelling at the site of the injection, to fever, which are the same symptoms associated with taking any other vaccine.

Some other side effects have been recorded in fewer cases, including sore throat, nausea, joint pain and general fatigue, which indicate that the body’s immune system is beginning to respond to the vaccine. No serious side effects were recorded during the clinical trial phase of the vaccine.

In addition, the vaccine will mitigate disease complications while preventive measures will continue to reduce the risk of infection transmission.

With regard to the vaccination campaign, Dr Abri pointed out that an identified recipient should respond promptly and visit the specified health institution as soon as they are notified to be among the vaccine target group. They should  also commit to take the second dose of the vaccine 21 days after the first in order to obtain the desired efficacy. A single dose of the vaccine is considered ineffective against the virus.

He also informed that the effect of the vaccine begins seven days after the second dose is administered. Before that period, the recipient is still susceptible to infection and should go to the health institution for evaluation if any symptoms of the disease appear.