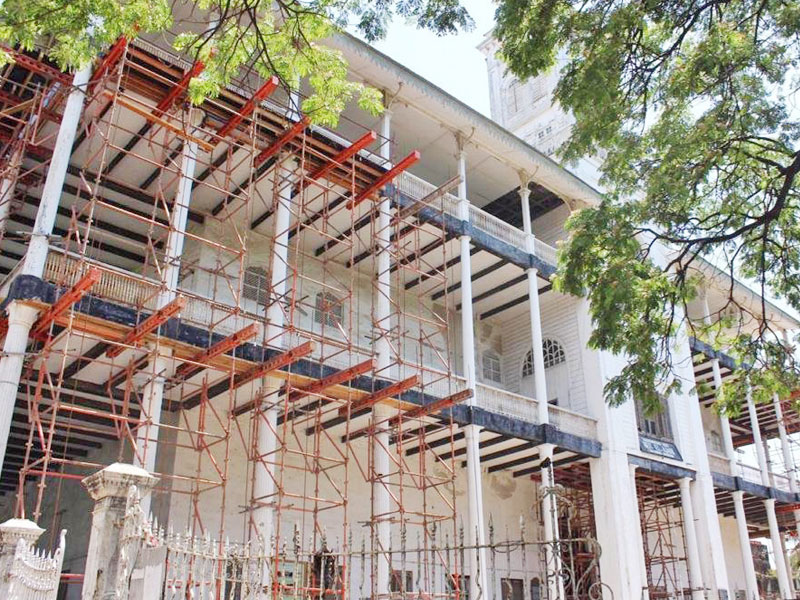 The partial collapse of the Unesco World Heritage site House of Wonders or Beit al Ajaib in Stone Town, Zanzibar on Friday, has evoked a sense of loss and regret from the Omani authorities as well the Unesco.

Owing to its long history of relations and shared culture and heritage with Zanzibar, Oman has committed to renovate Beit al Ajaib in response to the Royal Orders of the Late His Majesty Sultan Qaboos at a cost of RO5,931,770. A section of the House of Wonders, a landmark building dating back to 1883, which was undergoing renovations, collapsed on Friday.

The sultanate, represented by the Ministry of Heritage and Tourism, in a statement expressed regret over the loss.

‘The Ministry of Heritage and Tourism, with regret, has followed up the partial collapse of the House of Wonders in Zanzibar and hopes that, as the funding body for the comprehensive restoration, maintenance and rehabilitation project, a team will be formed from all concerned parties to find out the causes and determine the urgent and necessary measures to preserve and protect the building,’ the official statement said.

The ministry added that it had previously carried out the necessary strengthening process of the building before the comprehensive restoration began.

The ministry also issued a statement regarding false information being circulated on social media that the collapse took place after the restoration.

‘The truth is that the restoration work was not completed, but stopped since the beginning of the year due to the pandemic. The damage would have been greater had it not been for the reinforcement process that was already carried out.’

Following the news of the collapse, Mechtild Rössler, director of the Unesco World Heritage Centre, joined the people of Zanzibar, and the United Republic of Tanzania in general to mourn this sudden and significant loss, a statement from Unesco said.

‘The House of Wonders is one of the outstanding monuments in the Stone Town of Zanzibar (United Republic of Tanzania),’ Unesco stated.

“We are in contact with the Stone Town Conservation and Development Authority  which is currently carrying out a rescue operation and will soon be starting a preliminary assessment of the damage caused by the collapse,” said Mechtild.

“We have confidence that the authorities will carry out the necessary emergency actions and assessments to understand the causes of this damage and propose solutions to safeguard this monument which is an essential component contributing to the ‘Outstanding Universal Value’ of the site. Unesco stands ready to support the ongoing efforts and we are with the United Republic of Tanzania in facing this disaster.”

Earlier this month, a team from Oman, led by Eng Ibrahim bin Saeed al Kharusi, Undersecretary at the Ministry of Heritage and Tourism, visited the site for inspection. The Stone Town of Zanzibar is an outstanding example of the Swahili coastal trading towns of East Africa.