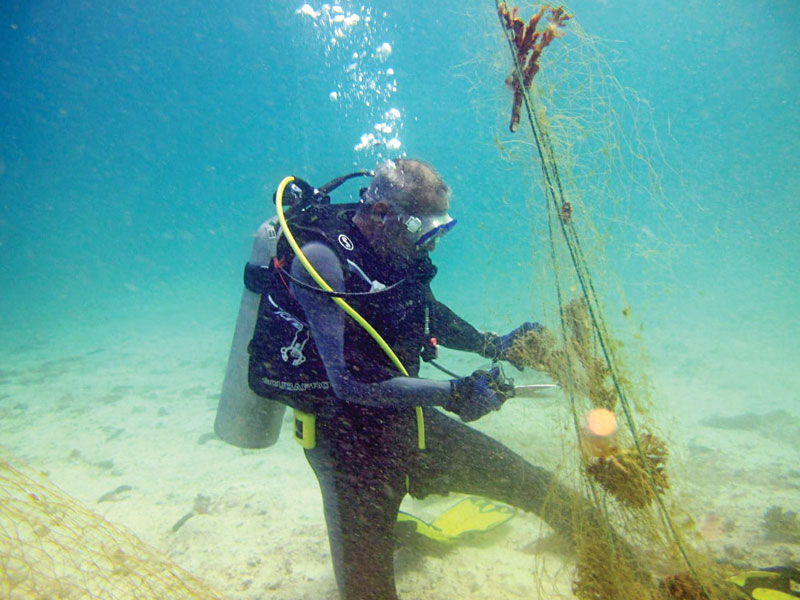 A cleaning drive of the coral reefs around the Damaniyat Islands Nature Reserve conducted by the Environment Authority fished out tonnes of marine waste, including fishing nets stretching over a hundred metres, this week. Abandoned and lost nets pose immense, if not the maximum, risk to the marine environment.

Speaking to Muscat Daily, Khamis Hammoud al Saadi, director of the Environment Department in South Batinah, said, “The campaign was launched on December 21 to remove nets entangled in the coral reefs of the nature reserve. It was carried out by the Environment Authority in the Governorate of South Batinah in coordination with its Marine Environment Preservation Department.”

Besides ridding the sea of pollutants, the two-day campaign aimed to spread awareness on the importance of preserving the marine environment in the community. Ten divers participated in the campaign.

Saadi informed that the biggest challenge to divers when carrying out clean-up activities is the same which entangles and kills marine creatures – fishing nets. Getting entangled in nets in the depths of the sea is divers’ worst nightmare.

“The fishing nets that were removed were of the type not permitted for use in Omani seas. These are called Scorpion nets.”

Urging fishermen to avoid using fishing nets in the area surrounding the Damaniyat Islands, he said they should avoid getting closer than a kilometre’s distance from the nature reserve to make sure marine currents don’t take the fishing nets to the coral reefs.

“We will continue to conduct clean-up campaigns to remove marine waste in the seas off South Batinah and urge all members of society to cooperate with us,” Saadi said.

Fishing nets used to be weaved from rope made of natural materials that decomposed over time. But since the 1960s, the nets have been made of nylon, a man-made material that is much stronger and cheaper. Nylon is plastic and does not decompose, so fishing nets lost in the ocean – called ghost nets – continue to catch fish for many years. Ghost nets entangle, injure and kill hundreds of millions of marine animals every year.

According to the Food and Agriculture Organization (FAO), abandoned fishing gear is the most significant source of entanglements in all documented records regarding sea turtles, coastal and marine birds, marine mammals, fish and crabs.

According to the Plastic Soup Foundation, which works on preventing plastic from ending up in the environment, ghost nets injure and kill marine animals. Marine mammals that become entangled in discarded fishing nets, such as turtles, choke. Fish that get caught starve to death. All these victims, in turn, are easy prey for other animals. As a result, there is plenty of life around abandoned fishing nets, which only increases the chance of new victims.

Oman hosts five of the seven sea turtle species, and the sultanate’s beaches and seas are often seen teeming with Green turtles, Loggerhead turtles, Hawksbill turtles, Olive Ridley turtles, and Leatherback turtles. Turtles look for floating objects to hide under, from under which they look for food, and that is how they become entangled in ghost nets.

Ghost nets also destroy corals by getting entangled in them. Powerful currents pull on the fishing nets in the ocean tearing off pieces of coral, damaging the reefs.