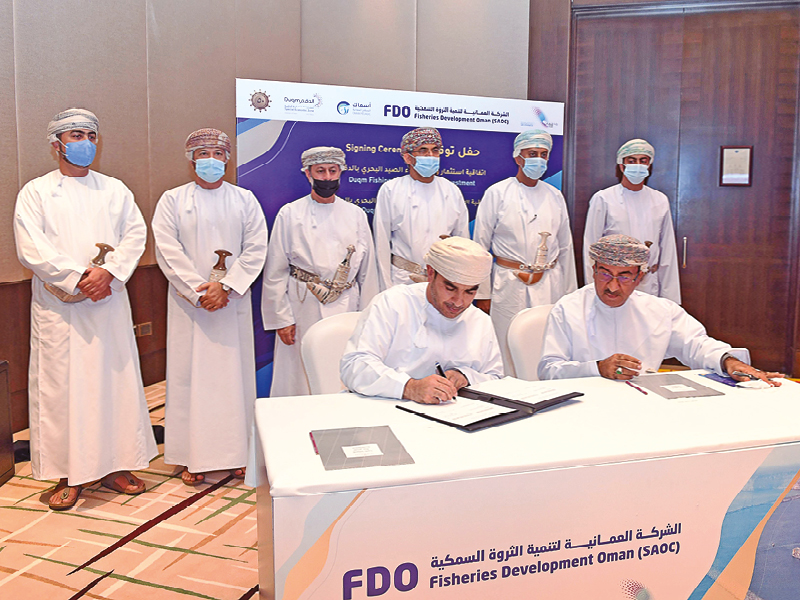 FDO also signed an usufruct agreement to use land for the fishing port with Al Wusta Fishery Industries (AWFI).

Construction of the port – spread over 8sqkm and a depth of 10m – is expected to cost RO63mn. The project will allow large fishing and food vessels to dock easily.

The signing ceremony was held under the patronage of H E Dr Saud bin Hamoud al Habsi, Minister of Agriculture, Fisheries and Water Resources, in the presence of Eng Yahya bin Khamis al Zadjali, in-charge of managing operations – SEZAD, Eng Dawood al Wahaibi, CEO of AWFI, and Khalid bin Ali al Yahmadi, CEO of FDO. Zadjali said that the two agreements are part of a strategy to attract local and global investments. SEZAD was successful in attracting investments to the tune of RO135mn to develop fishery industries. He noted that investments will increase with the beginning of operations in the fishing port.

According to Yahmadi, FDO currently produces about 63,000 tonnes of fish. “One of company’s aquaculture projects in Al Wusta governorate will be located in the wilayat of Al Jazer with a production capacity of about 24,000 metric tonnes of shrimp annually.”

He said that FDO will establish the largest fish farming project spread over an area of 40sqkm with an initial production capacity of 215,000 tonnes of shrimp in Barr al Hikman.