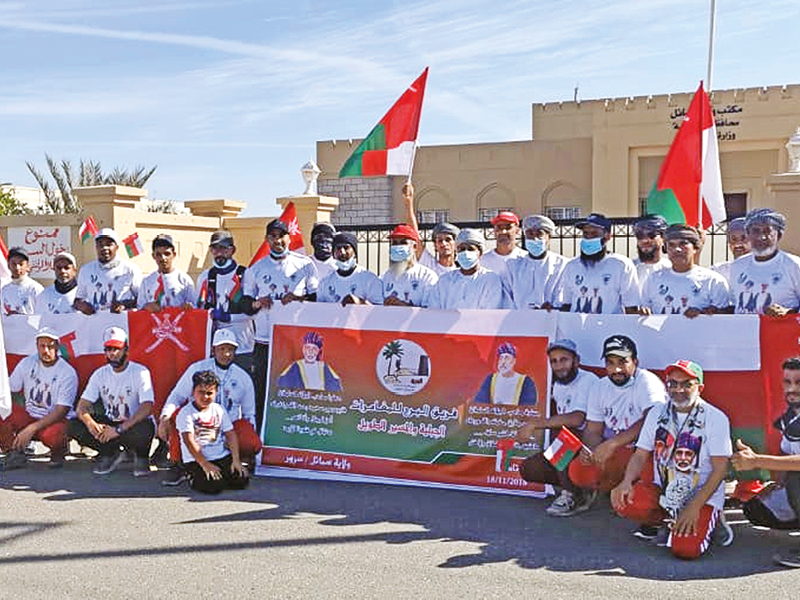 Some 35 men, in four groups, walked and cycled 125km in the wilayat of Samail in Dakhliyah on December 18 to express their love and loyalty to the country and His Majesty Sultan Haitham bin Tarik, and also to create awareness on sporting activities.

Yaqoob al Musalmi, a participant, told Muscat Daily that the event was organised by Al Burj Mountain Adventure Team, in cooperation with Samail Sports Club. He said, “The participants were divided into four groups, each setting off from a different place to meet at the finishing point in front of the office of the governor of Samail.”

The fourth group set off on bicycles from the wilayat of Izki at 7.40am and reached the finish point at 9.45am, having covered 50km.

“The aim was to promote domestic tourism, explore mountains and inculcate the culture of fitness among people. Participants carried photos of His Majesty the Sultan, the national flag and banners expressing their joy on the occasion of the 50th National Day,” said Musalmi.

“Citizens sang songs expressing their love for His Majesty the Sultan. Participants passed through plains, wadis and mountains.”

He said the Al Burj Mountain Adventure Team plans well before embarking on any event. The site for the adventure trip is chosen after much deliberation and research. A team is also sent to study the place and the weather conditions.

The team has organised over 17 hiking tours since 2018 in Dakhliyah to promote domestic tourism and spread awareness on the importance of sports.