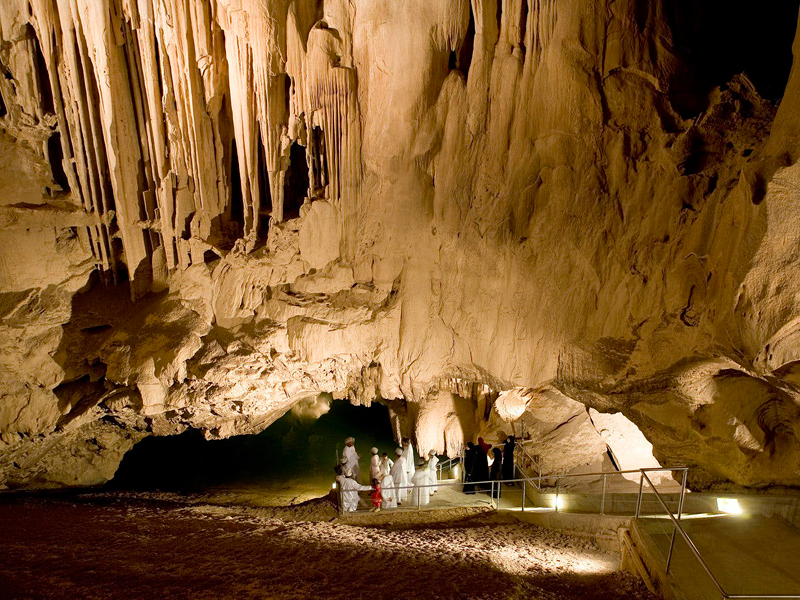 Oman is endowed with many caves  that are an adventurer’s delight. While some of the best caves have been discovered only lately during the past decade some others have been very popular among those who dig thrill and challenges while exploring the sultanate. The caves in Oman are of different types, with varying lengths as well as difficulty quotients to access them in unique geographic formations. Of these, most are present in Dhofar Governorate and also have springs and pools within and around them. The two most significant caves are the ancient Al Hoota Caves and the mysterious Majlis al Jinn Cave, both of which present much intrigue and unfathomable tales associated with them.

Located in the southern part of the Hajar Mountain range, near Jebel Akdhar, in Wilayat Al Hamra of Dhakiliyah governorate, this ancient cave lies closer to Nizwa, a nearly two-hour drive from Muscat.

This fascinating cave, with splendid formations of soil and rock within, had been discovered hundreds of years ago by the local residents. It extends for a stupendous five kilometres underground. However, visitors are allowed to  access only a distance of 860 metres via a guided route which ends in a lake within the cave.

The Al Hoota Cave has two openings through which water cascading from the mountain top enters and exits after passing through different sections within. The lake within is said to be around 20m deep and contain several species of ‘blind fish’. Visitors are not allowed to explore other sections of the cave, except the one marked out, as vast sections of the interior of the cave have been preserved for heritage purposes.

Majlis Al Jinn, located at the foothills of the eastern side of the Hajar Mountains, is said to be one of the the greatest and most beautiful natural wonders that has been recorded as one of the largest underground caves in the world.

The area within this cave is 58,000sqm, with an approximate length of over 300m and a width of around 220m. The cave also has a ceiling as high as120m, appearing like a man made dome. The exterior of this cave doesn’t have any traces that indicate its presence. However, entry to it is possible viathree small openings that do not quite announce of its wonderful existence below.

Majlis Al Jinn Cave is located at the northern tip of the Salma Plateau near the village of Fins in Qurriyat, near Muscat. This is on the road that connects village Fins with village Tiwi, in Sur.

This myterious cave, which has numerous fictitious tales associate with it, including one that it was the abode of a Jinn, had been discovered by accident while geologists were searching for carbonate rocks in a quest to discover deep underground water reserves.

According to official records, the first man to descend inside the cave was Don Davidson in 1983, through an opening extending to a depth of 120m, considered to be the shallowest of the three openings. In 1984, he was followed by his wife, Cheryl Jones, who descended into the cave through its deepest opening, which goes down 158m. Davidson also discovered the third opening to the cave a year later.

Reaching the Cave opening requires strenuous physical effort, since one must traverse a distance of 1,300m to reach the cave opening through rugged mountain terrain. The only way to descend into the cave is by ropes. The cave is considered a repository of natural life treasures and has been estimated to be 50 million years old.

The Ministry of Tourism is currently developing a mechanism to facilitate tourist visits to the cave chamber to enjoy the geological formations and wildlife there, through building a path specially for tours of the cave.