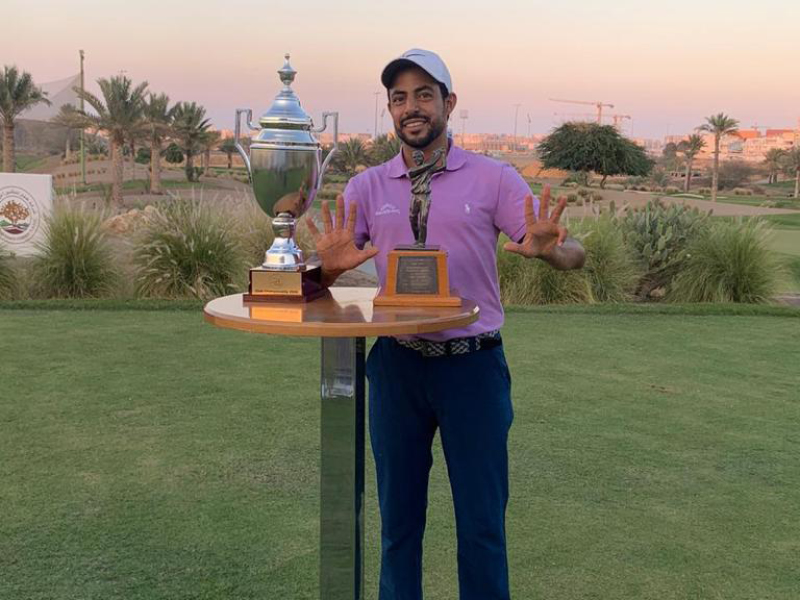 Oman’s top-ranked golfer Azaan al Rumhy is a household name among the golfing family in the sultanate. And his fame and name has been the result of his long hours spent on the golf courses, including one next to his house – the Ghala Golf Club.

The love for the Ghala fairways and greens is special for the 36 year old and the reason is simple – Azaan’s continued success on the course.

The latest feat, a record-winning ninth Ghala Club Championship title, which he won last week underlined why he loves this course the most.

The recent title seems to be have rekindled his love-affair  with the Ghala Golf Club as the win comes after a gap of seven years. Call it a coincidence, the last club championship title Azaan had won in Ghala was in 2013, soon after the birth of his son, Yousuf.

And this time, days after his daughter, Rayyan, was born, he clinched the 2020 title, winning the event by nine strokes. A total of 89 golfers from the sultanate participated in the 2020 Ghala Golf Club Championship, which was a two-day 36-hole stroke event.

Azaan’s success at Ghala came weeks after his maiden triumph at the Al Mouj Club Championship held in the last week of November.

Speaking to Muscat Daily, Azaan said, “The back-to-back title wins are a record in itself. No golfer has won two club championship titles in recent times and that too in the same year. My win at Al Mouj gave me the confidence for the Ghala tournament.

“I was a bit worried ahead of the Ghala event as I had a backache. But, thanks to doctors at the Oman Sports Medicine Centre, I was ready and came up with a brilliant game on day one.

“I shot two under-par 70 on opening day to take a six-shot lead going into the next day. And winning the title by nine shots for my ninth title was just fantastic.”

Azaan shot 78 on the next day for an overall score of 148 while Faiz Mohammed Riaz came second with 157 and experienced Ali Hameed al Saleh took the third spot with 160. Azaan recalled that he had not shot such a low score (two-under 70) since his 69 at the 2014 Asian Games in Incheon, South Korea.

Oman’s top-ranked golfer said, “It is great to be back in action with the start of the domestic events. Winning the club championship in Ghala, one of the oldest in Oman [it began in 1974], for the ninth time is a proud moment for me. I am now looking for more participations in regional and open events in Oman.”