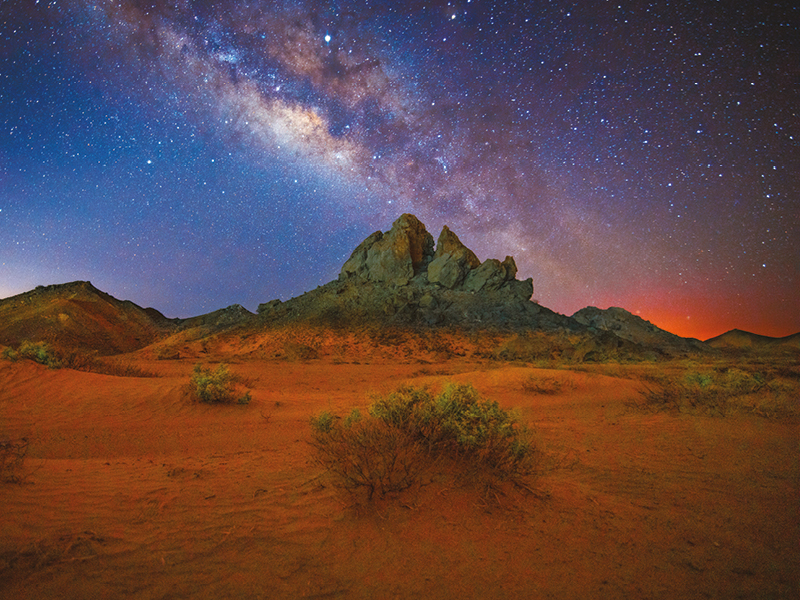 Among the sultanate’s tourism projects in the pipeline are plans to promote astronomical tourism. Oman’s clear skies and commitment to keep it pollution free, besides several other natural factors, allow stargazers a ringside view of celestial events.

Promoting interest in astronomy in the community and raising awareness on the scope of astronomical tourism in the country, photographer Adnan Juma Said al Alawi has been documenting astronomical events visible from Oman, including the Geminid meteor shower of last week.

Alawi, 28, from the wilayat of Jalaan Bani Bu Ali in South Sharqiyah governorate, captured a remarkable set of photographs documenting the Geminid meteor shower that was visible in Oman too on December 13 and 14.

The Geminid meteor shower is one of the most active and dependable displays of the year, according to the American Meteor Society. This year, the shower peaked on the evening of December 13 and 14.

This phenomenon, first recorded in 1862, causes a shower every December. The shower is most visible when the radiant point – the point from which the meteors appear to radiate – is highest in the sky. Although the Geminid shower is known for its ‘shooting stars’, the number of meteors visible depends on the time and the darkness of the sky.

Speaking to Muscat Daily, Alawi said, “The sultanate’s skies witness numerous astronomical events. I started photography in 2017. I love to photograph astronomical phenomena, such as solar eclipse and meteor showers.”

According to Alawi, the showers on December 13 and 14 were a spectacular event presenting a multitude of meteors – 120 meteors per hour.

“I monitored this phenomenon with the naked eye – no viewing devices. I was able to detect over 1,000 meteors after midnight in the Al Ashkharah area in the wilayat Jalaan Bani Bu Ali in South Sharqiyah.”

“Oman is known for its beautiful sites to view astronomical objects, such as the Starlight Reserve in Al Hajar al Gharbi in Dakhliyah governorate. I have participated in Oman Astronomical Society’s events to observe celestial events in the past. I want to promote astronomical tourism in Oman and also encourage domestic tourism,” Alawi said.

“I have difficulty getting information on astronomical events. But I keep in touch with some astronomers in Oman and other Arab countries. That is how I manage not to miss out on any event.”

Alawi is keen to hold an exhibition of his photographs in the near future.

Sooner still, he will release a booklet titled Oman Sky at Night in 2021 presenting his photographs as a guide for astronomy enthusiasts in Oman.