‘NO WINNER, NO LOSER’ 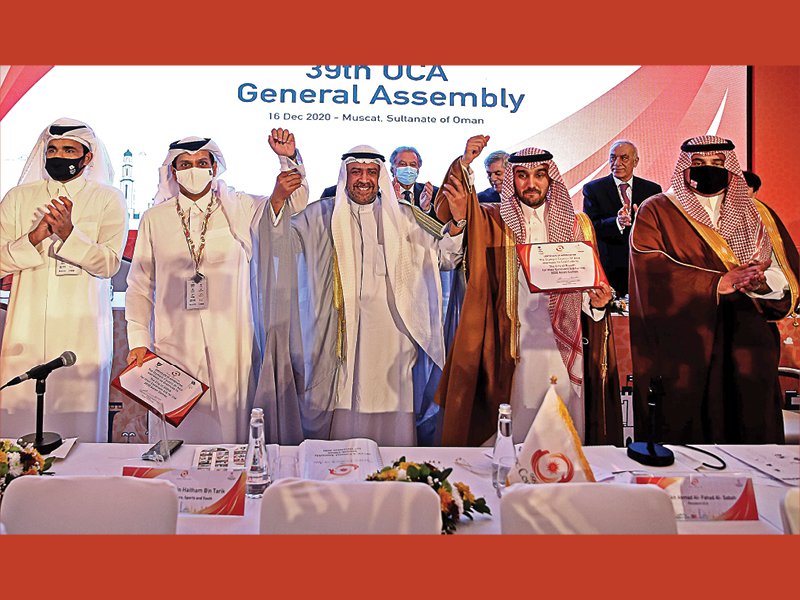 It is an age-old cliche – a picture is worth a thousand words.

On Wednesday, at the end of the 39th Olympic Council of Asia (OCA) General Assembly held at the JW Marriott Muscat Hotel, one picture stood out along with OCA president Sheikh Ahmad al Fahad al Sabah’s remark, ‘there is no winner, no loser’, summing up a victorious day for Gulf region as the 21st Asian Games hosting rights were won by Doha while the 22nd edition will be held in Riyadh in 2034.

Earlier, Sheikh Ahmad’s late-night parleys for a ‘win-win situation’ among the two candidate host city bids of Doha and Riyadh went on till early

Wednesday morning with a consensus reached that the two Asian Games will be held in West Asia and voting in the general assembly will decide the winner of the 2030 bid with the loser assured of 2034 Games.

The voting was planned to be done electronically for the first time but technical glitches led to a couple of hours delay forcing the OCA officials to have both manual and electronic voting options.

While therepresentatives of 26 National Olympic Committees (NOCs) in Muscat voted manually, the other 19 cast their ballots online.

Following the vote, the results were announced by Sheikh Ahmad, who said that Doha polled more votes to win the 2030 bid. Later it was known there were eight abstentions while Doha gained 27 votes compared to Riyadh’s ten.

“I can now announce… that the city who had the highest vote and will host 2030 is Doha,” said Sheikh Ahmad. “The second hosting city, for 2034, is Riyadh.”

It means back-to-back Games will be held in the Gulf with two political opponents – Qatar and Saudi Arabia – having something to cheer for.

The vote took place amid a bitter and long-running political dispute between Saudi Arabia and Qatar.

Saudi Arabia is one of four countries which has imposed a trade and travel boycott on Qatar since 2017, though there have recently been indications the dispute could be resolved.

The OCA General Assembly got off to a royal start with H H Sayyid Theyazin bin Haitham al Said, Oman’s Minister of Culture, Sports and Youth, as the chief guest.

Following a brief opening speech by H H Sayyid Theyazin in the presence of other Royal Highnesses and the OCA executive board,  the general assembly heard the report of the OCA evaluation commission and also saw the presentations of the bid cities by high-powered delegations.

The 2030 Games will be the second time the Qatari capital Doha will host the largest continental multi-sports event. Doha had successfully hosted the Asian Games in 2006.

During the presentation to the general assembly, Doha put forward a compact and risk-free bid, with all sports stadiums already in place.

The awarding of the Asian Games will further boost its profile as a world-class sports city, capable of hosting major international events in a variety of sports. Qatar will host the next FIFA World Cup in 2022.

Riyadh will welcome Asian Olympic family for the first time to Saudi Arabia’s capital city in 2034.

Later addressing mediapersons, Jassim Rashid al Buenain, the Qatar Olympic Committee’s secretary general and CEO of the Doha 2030 Bid Committee, said, “We are very proud and this is a historic moment for us. Our bid committee is confident of hosting a world-class event. In the past, we have proved our hosting credentials and we are going to make it a memorable edition.”