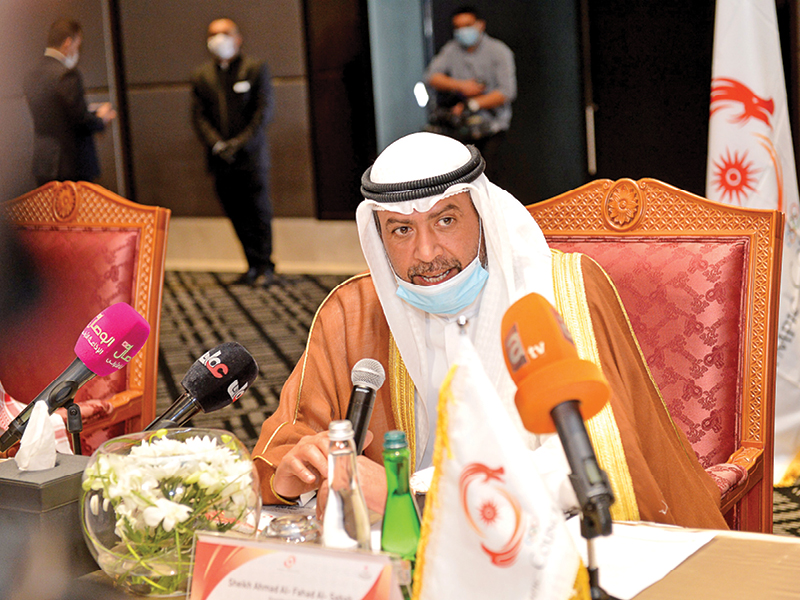 Sheikh Ahmad al Fahad al Sabah, the president of the Olympic Council of Asia (OCA), has long been known for his diplomatic skills.

Over the past many decades, Sheikh Ahmad has used his inter-personal skills to bring about solutions to the even the most complex of sporting issues between nations and helped in rapprochement of rivals.

Heading the OCA since 1991, Sheikh Ahmad, has also been the president of the Association of National Olympic Committees (ANOC) from 2012-2018.

Presiding over the 74th OCA executive board meeting held at the Kempinski Hotel Muscat and online around the continent on Tuesday, Sheikh Ahmad sought the support of the executive board ahead of the key voting by the 45 OCA members to decide the 2030 Asian Games host city on Wednesday during the 39th OCA General Assembly.

There is a direct fight between Qatar’s Doha and Saudi Arabia’s Riyadh for the hosting rights of the 21st Asian Games in 2030. If a consensus is not reached by Wednesday morning, it will be the first time since 2012 that the OCA General Assembly will vote to decide the host city.

Sheikh Ahmad, considered a power broker in world sport, is keen to avoid a vote between two ‘great’ candidate cities and suggested the executive board that he would like to speak to both the delegations on Tuesday, to find a ‘win-win’ situation.

Sheikh Ahmad will need to use all his diplomatic skills to try and avoid a vote and hopes are high that he can persuade one of the cities to host the Asian Games in 2030 and the other in 2034.

“I believe in the OCA that we always show solidarity and unity, and for this reason I will try to find a solution,” he told the meeting on Tuesday.

“I have visited both cities and they are ready to host the Asian Games in 2030. They have great financial support, great sports infrastructure and great support from all levels of government.

“I will talk to the leaders of both the delegations tonight and try to find a win-win situation.”

Sheikh Ahmad asked for the authority of the executive board members to attempt to find a solution with the two bidding cities and received unanimous backing.

The chairman of the OCA advisory committee, Ng Ser Miang of Singapore, said, “We have received the report of the OCA evaluation committee and it is clear we have two wonderful bids from two excellent cities. I fully support you [Sheikh Ahmad] on this.”

Miang, who is a vice-president of the International Olympic Committee (IOC), likened the situation to the IOC decision to award the Olympic Games to Paris in 2024 and to Los Angeles in 2028 without the need for a vote. “In this case, all were winners and there were no losers,” he added.

Earlier in the meeting, the chairman of the OCA evaluation committee, Andrey Kryukov, secretary general of the Kazakhstan Olympic Committee, presented the evaluation report from their visit in November and said both cities had ‘every opportunity and high potential’ to host the 21st Asian Games in 2030 and described their legacy plans as ‘excellent’.

If Sheikh Ahmad fails to find a solution on Tuesday night, the online vote, which is being tried out for the first time, will go ahead as planned at the General Assembly on Wednesday at the JW Marriott Muscat. Over the past couple of days, the OCA has been conducting a series of tests to familiarise the NOC delegates with the voting procedure.

Out of the 45 OCA member nations, a total of 25 National Olympic Committee (NOC) representatives are attending the OCA General Assembly in Muscat while the remaining 20 NOC delegates will take part on the online platform.

The Asian Games was first held in New Delhi, India in 1951, although the roots of international multi-sport events in Asia date back to the first Oriental Championships in Manila, Philippines in 1913.

With the next two Asian Games already decided, Sheikh Ahmad said, “The OCA is very satisfied with the sports calendar for the next decade as we will have the next three host cities for the Asian Games in place.

“The next available hosting date for the Asian Games is 2034 – 14 years away – and this shows the confidence and trust in our Asian Olympic movement.”