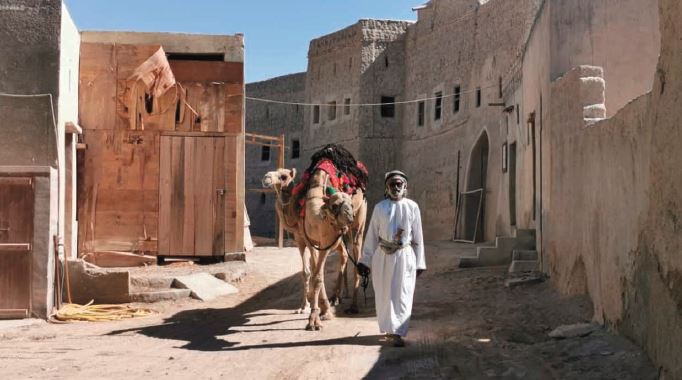 Ahmed Harub al Mahrooqi, a veteran adventurer who has accompanied many   expeditionists across deserts in Oman and the region over the past few decades, has planned another memorable expedition from Adam, in Dakhiliyah region to Burj al Sahwa, in Seeb, to mark 50 years of the Renaissance in Oman.

The week-long expedition, beginning on December 9, at 9am, will culminate in a felicitation function in Seeb on December 16. Mahrooqi’s plan is to walk at least 25km per day along with his two camels who have been accompanying him on many similar expeditions in the past. In fact, the veteran adventurer shares a special bond with these camels and had also been camping with them on the outskirts of the capital during the months of lockdown in Oman, to experience unique life of solitude.

“Adventure is in my blood. I was born in Tanzania and came to Oman when I was just three years old after a long and tiresome journey. Ever since, I have been leading a tough life out in the desert and the mountains and I have been conditioned to rough it out. Now, at the age of 63, I still feel energetic and motivated to replicate many historic journeys which our forefathers undertook hundreds of years ago,” he said, adding, “these journeys only strengthen my love for my country and its history which is not just interesting but also ever inspiring.”

The expedition will be flagged off a village in Adam which is said to be the abode of the Al Busaidi clan and the birthplace of Ahmad bin Said al Busaidi, the first Imam of Oman, Mahrooqi said. In fact, he had been planning to undertake this expedition in the beginning of the year itself but had to indefinitely stall his plans due to the pandemic and restrictions in movement across Oman, he added.

To showcase the cultural heritage of Oman to tourists to affirm the trust of citizens in HM, Sultan Haitham bin Tarik.

To tell all citizens of Oman that we need to preserve the heritage of Oman for generations to come.

Ahmed Harub al Mahrooqi will be accompanied by a European adventurer and blogger Rachael Maciver, from Denmark, and Mohammed al Jawhari, a young Omani.

Taking photos and video clips as they pass through heritage villages along the route.

Talking to tourists on the way about the culture, heritage and history of Oman.

Spreading safety precautions and guidelines about COVID-19 to villagers on the way.

The participants of this trip will be camping in individual tents for rest and sleep at the end of each day. They will be preparing their own food with beans, eggs, fruits and whatever is available on the way, as the ancient travellers did.

Mahrooqi says that he always supports his own journeys by allocating funds for the purpose every year. However, this journey has the support of two sponsors – Vanguard Systems & Services International and Quick Challenge.