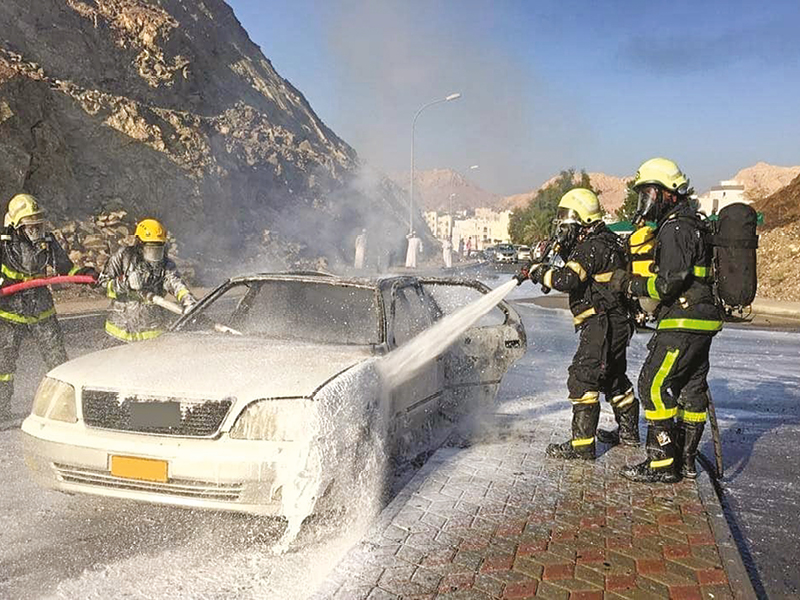 Firefighters from the Public Authority for Civil Defence and Ambulances (PACDA) extinguished a vehicle fire in Darsait in the wilayat of Muttrah on Sunday. No injuries were reported.

An official from PACDA said incidents of vehicle fires in Oman dropped during 2019 with 769 cases reported from different parts of the sultanate.

Talking about the precautions to avoid fires, he said, “Motorists should adopt simple measures to protect their vehicles from fire such as turning off the engine and mobile phones when refuelling, ensuring fire extinguishers are in place, using only original spare parts – especially radiators – and getting vehicles repaired only at licensed workshops.”

He added, “In case a vehicle catches fire, stop immediately, evacuate passengers and try dousing the fire using an extinguisher. Disconnect the battery if possible to prevent further spread.”

He said the vehicle should be pulled over if the engine is overheated and care should be taken not to park it near generators or flammable materials. He said the radiator is an important part that reduces the temperature in the engine parts, thus it should be protected from being damaged and corroded.

“We urge vehicle owners to inspect vehicles at regular intervals and ensure the availability of a hand-held fire extinguisher.”