We truly believe in the GCC and its structure: Sayyid Badr 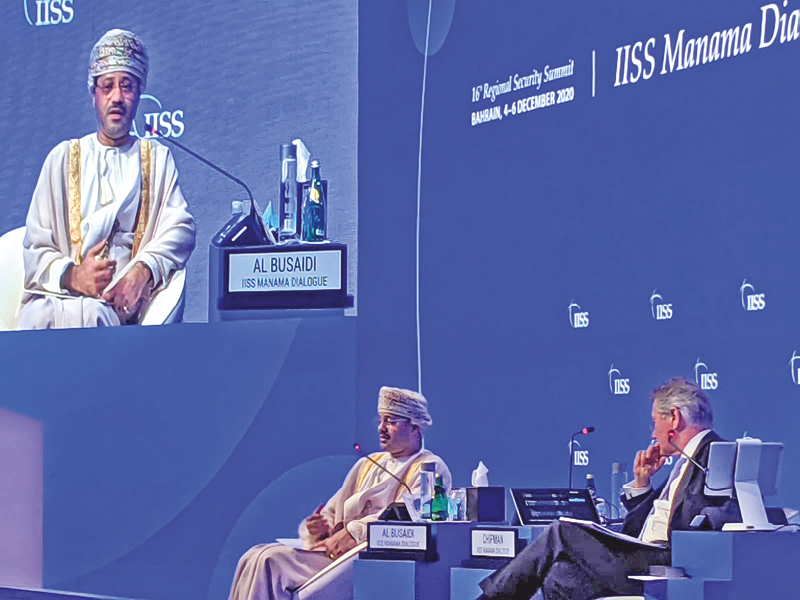 H E Sayyid Badr bin Hamad bin Hamoud al Busaidi, Foreign Minister, has called for a constructive dialogue within the GCC countries to thrash out a new chapter in the council’s history.

“We truly believe in the GCC and its structure. I am hopeful that we can have a GCC summit and start a new chapter in its history. To build confidence, we need a critical dialogue about issues upon which we disagree,” H E Sayyid Badr said in a speech delivered at the 16th edition of the IISS Manama Dialogue being held in Bahrain from December 4-6.

“Those of us who enjoy prosperity and privilege, owe it to those who do not to make a contribution to a stable, open and inclusive economic environment. The better we get to know each other day to day, the easier it will be to work together to advance multilateral efforts,” he said arguing the need for inclusivity and multilateralism.

“Values of multilateralism and inclusivity have always governed Oman’s engagements and foreign policy; exclusion, rejection or blockades are not in our diplomatic repertoire,” he said.

The summit is a forum for government ministers, as well as experts and members of opinion-forming and business communities, to debate the Middle East’s most pertinent security and foreign policy challenges.

“For Saudi, it is critical to get the Israelis and Palestinians back to the negotiating table; that is the only way to bring about a lasting regional peace,” said Prince Faisal bin Farhan bin Abdullah al Saud, Minister of Foreign Affairs of Saudi Arabia, when asked about the Abraham Accords. “Our position is clear: we support a two-state solution for Israel and the Palestinians, and we call both parties to the negotiating table,” said Dr Abdullatif bin Rashid al Zayani, Bahra-in’s Minister of Foreign Affairs.

“For too many decades, the wider world has considered the Middle East as a problem area; we urgently need to change that perception and demonstrate how we are committed to interdependence and shared aspirations,” Dr Zayani added.

On the sidelines of the summit, H E Sayyid Badr met Prince Faisal of Saudi Arabia. During the meeting, they discussed bilateral relations and ways to strengthen and support them. They also discussed developments in the region and exchanged views on several regional and international issues of common interest.

Sayyid Badr also met Dr Zayani of Bahrain, when the historical relations between the two countries and the common desire to strengthen them in all fields were emphasised, and a number of issues of common interest reviewed.

H E Sayyid Badr also met Kimberly A Reed, president and chairperson of the Board of Directors of the Export-Import Bank of the United States (EXIM). “Delighted to meet this morning with EXIM president and chairperson Kimberly A Reed on the sidelines of IISS Manama Dialogue in Bahrain. Good exchange of views on how to increase economic, trade and financial cooperation between our two countries,” H E Sayyid Badr later tweeted.