Diving to save the seas 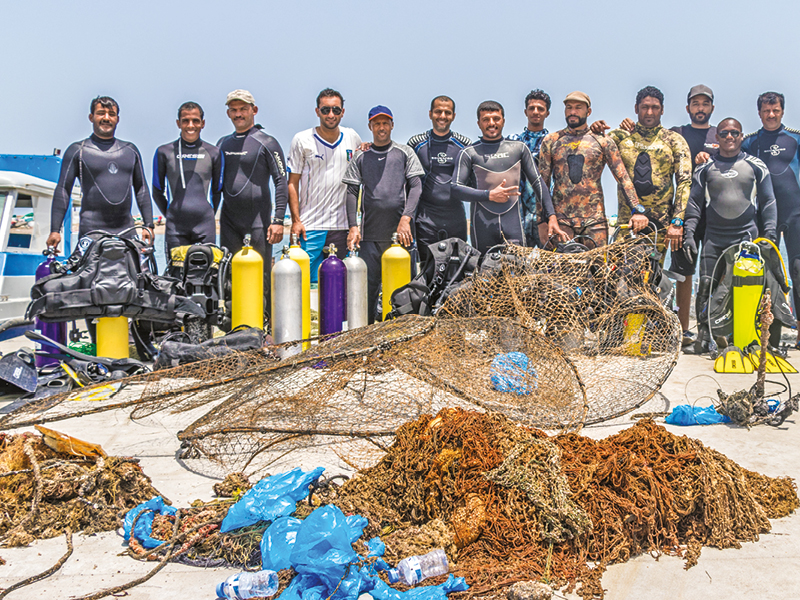 A group of environmentally conscious divers has taken on the a herculean task of cleaning the depths of the seas around Oman. Their dives since April 2019 have resulted in ridding the sea of more than 3 tonnes marine waste, including fishing nets and plastic, while at the same time rescuing sea animals entangled in ghost nets.

Twenty-seven Omani volunteer divers from the wilayat of Quriyat came together for this task to clean the marine environment and protect coral reefs. Calling themselves Quriyat Divers, the team made its first dive in April 2019.

Speaking to Muscat Daily, Juma Khamis al Amri, head of Quriyat Divers, informed that the team was established in January 2019. It made the first of eight clean-up dives in Ras Abu Dawood in Quriyat and removed 800kg of nets, anchors and ropes.

The latest dive was on November 21, also in Ras Abu Dawood, when the team removed 210kg of nets from depths of 16m to 30m and released marine creatures, including turtles, entangled in nets. “Our cleaning campaign has shown that we human beings have become very reckless. We are destroying our natural resources,” Amri said.

He noted that the Quriyat Divers’ objective to rid the sea of pollutants andpreserving it will ultimately help fishermen. Through its efforts, the team also aims to spread awareness on the importance of preserving the marine environment in the community. Additionally, it hopes to encourage interest among community members in marine activities and to participate in such events abroad to gain experience in the field. Quriyat Divers also conducts environmental workshops for school students and fishermen.

The biggest challenge for the divers when carrying out clean-up efforts is the same which entangles and kills marine creatures – fishing nets. Getting entangled in nets in the depths of the sea is divers’ worst nightmare. “Occasionally, we also encounter poisonous fish, aggressive sharks and getting stuck in coral reefs. But we are determined to continue our clean-up campaign with the support and encouragement of our families.”

Prior to physically removing the waste, some members of the team do a reconnaissance dive to the site and write a report, which is discussed at a meeting and work delegated to each member. “We are also cooperating with entities such as the Environment Authority and the Coast Guard,” Amri said.

The team is enthused to continue their important work of cleaning Oman’s seas. “And we hope fishermen abide by fishing laws. They shouldn’t discard unwanted nets into the sea,” Amri urged.

The Quriyat Divers can be emailed at [email protected] gmail.com or Twitter @quriyat_divers for clean-up activities.