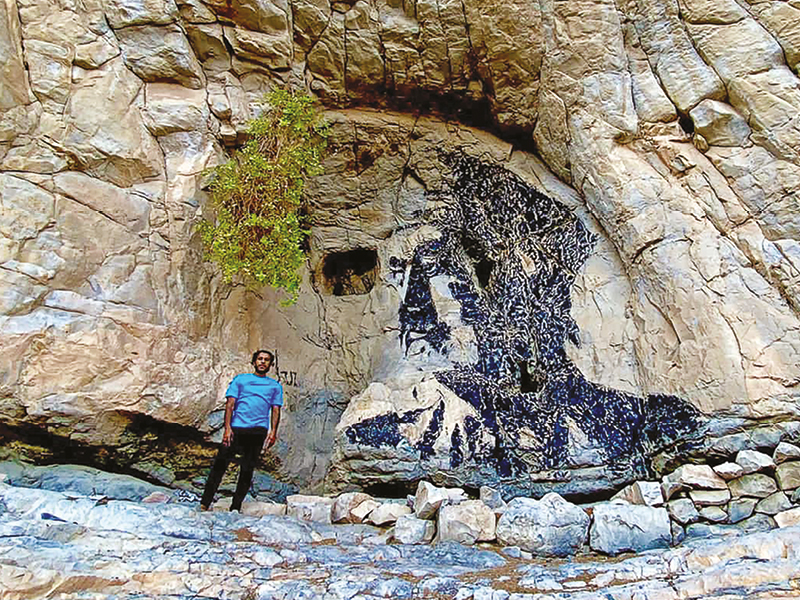 To mark the 50th National Day and express his love for Oman and His Majesty Sultan Haitham bin Tarik, Abdulaziz al Shehhi has painted a portrait of His Majesty the Sultan on a rock wall of a mountain in Khasab, Musandam governorate.

Speaking to Muscat Daily, Shehhi, 33, said, “I have been doing graffiti art since childhood. I painted the image of His Majesty Sultan Haitham on a mountain in a pop art style. I started painting in September and it took two months to complete.”

Shehhi also wanted to show His Majesty Sultan Haitham the people’s support he has in all his endeavours through the portrait. Measuring 6m across, he faced the difficult task of climbing to an altitude of 100m with all his art material before he could start work.

“I used watercolours and acrylics. It was a challenge getting the proportions right within the scope of the rock wall area that I could paint so that the portrait, although enlarged, was the exact image of the real person and readily recognisable,” Shehhi said.

Talking about his art, he said, “I painted portraits of the Late His Majesty Sultan Qaboos bin Said in different sites in Khasab for five years. I have also painted the image of His Majesty Sultan Haitham on one of the peaks of the Hajar Mountains, also in Khasab, and one of Sultan Qaboos on the opposite peak facing it. I started those portraits on January 13, 2020. It took six weeks to complete.”

Shehhi plans to continue painting on natural canvases, like mountains and sheer cliffs, in Khasab to promote Omani tourism. “I hope Omani painters are allowed to paint in public places and on bridges to promote tourism.”