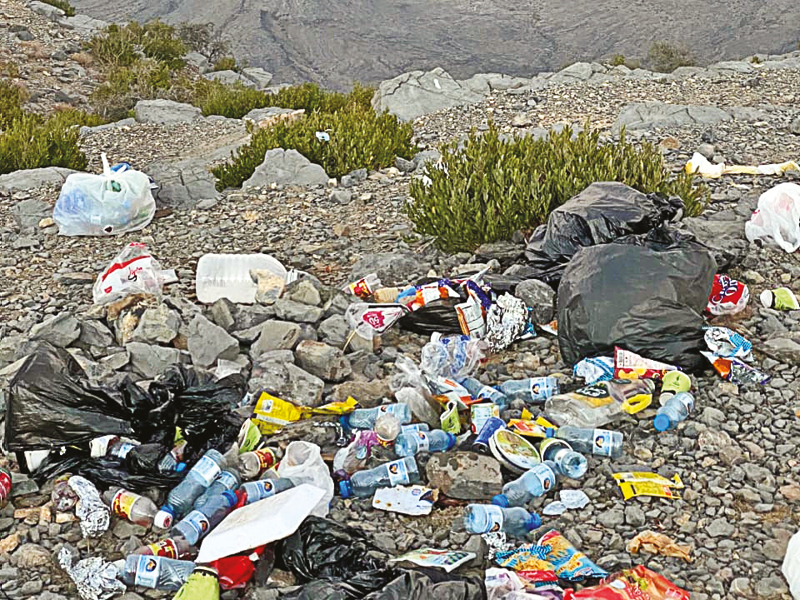 A photograph of a heap of waste in the wilayat of Al Hamra in Dakhliyah governorate has evoked strong reactions among nature lovers on Twitter.

A citizen brought to the Environment Authority’s notice, through social media, an instance of waste being dumped in Al Hamra. Abdullah al Abri, who posted the picture in his Twitter account, said, “Unfortunately, some visitors left waste including leftover food and some plastic bags, boxes and bottles after their trip to Al Hamra. It is not the first time that this has happened.”

Saif al Kindi said, “The violators must pay a big fine and spend time in prison. And in the event of repetition, their pictures and names must be published to limit damage to the environment.”

Another Twitterati said, “We want laws which deter people from throwing waste, an action that affects environment.”

“I call upon everyone concerned to keep tourist attraction areas clean. These natural assets have an invaluable economic, tourism and historical value that must be protected. It is important to put an end to this absurdity,” said another Twitterati.

Ahmed asked, “Are there litter containers near this tourist site? Some people who visit these beautiful places are uncultured to say the least.”

Abdullah al Abri said, “I clean up the place almost every month, and there are containers for litter, but unfortunately some people throw their waste outside. We need to spread an environmental friendly culture among the visitors.”

Hilal al Qasabi said, “Patrols must increase in tourist areas and a fine of not less thanRO100 must be imposed on violators.” Hussain al Harthy said, “I suggest to the responsible authorities in each governorate to place garbage bins in crowded places, and conduct campaigns to monitor these places by photographing them. They can take down the car number plates and take people who don’t remove their waste properly to task.”

Another citizen said, “Unfortunately, this phenomenon has spread recently. I am asking the violator, would you accept if this waste is placed near your home or farm? I appeal to everyone to preserve the environment because it is a noble human duty, and our religion has urged us to maintain cleanliness in the body, clothing and place.”

Abu al Mundhir said, “I hope that the Ministry of Education will adopt a scientific course on cleanliness and preservation of the environment for school students. I thank everyone who keeps this country clean.”

The Environment Authority tweeted that its control teams are not able to monitor all the sites in the sultanate.

‘These wrong practices must be addressed by all; everyone is responsible for protecting all the picturesque natural sites in all parts of the sultanate, and monitoring must include self-censorship before anything,’ it added.