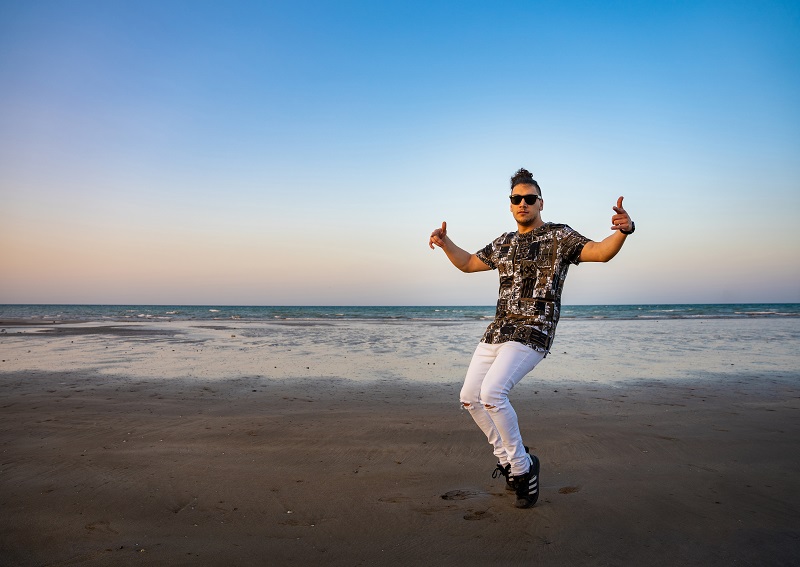 Hussein al Nabulsi, the ‘Girls in Dubai’ famed half Russian, half Jordanian rapper, who lives in Muscat, believes that consistency is the key to success. Despite a vast fan following on social media who go gaga over his unique singles, Hussein pays keen attention to presenting every new single with a touch of class of his own

To all budding and aspiring artists wondering how to showcase their talents to the world, Hussein al Nabulsi, a popular rapper known as ‘Hussein’, has a simple message – Never give up, there could be many surprises round the corner! The extremely talented rapper is now keen on rediscovering himself to stay relevant in the ever-expanding fray of Gen Next rappers.

Hussein, a half Russian half Jordanian rapper who was born in Ukraine, currently lives in Muscat and has an immense fan base on social media ever since he launched a few singles that became instant hits and connected with the new generation worldwide. The young singer who believes in never giving up says he never took ‘No’ for an answer and it was that spirit that fuelled his determination to assert himself as a singer. Today, after years of hard work and his share of ups and downs, he is wellknown as a super talented rapper, singer and song writer.

Hussein’s style of music was inspired by Lil Wayne, his favourite celebrity artist. He currently makes free music for his fans only to stay connected to them. He also interacts with his fans on social media, asking them to pitch in their ideas for his next single, so that he could keep the connection alive.

The journey for becoming a successful musician was certainly a rollercoaster ride for Hussein who started out in 2008 after he came to Oman as a rapper and songwriter and made hip-hop and R&B remixes as a hobby. After understanding the potential he had in himself, not to mention the widespread appreciation that came his way, he decided to seriously  his line of music with a renewed vigour.

In 2009, Hussein initially formed a band with two other artists called ‘Swagger Surferz’, and like every other musician, Hussein experimented with a couple of songs before he got recognised. This was the launchpad for his music career and the band was successful in performing live concerts which brought them a lot of accolades.

In 2015, he, however, he took a break and focused on his graduation to get a better grip on life. His advice to all budding artists is, “Never give up on what you love to do best, and make the best use of the talent you’ve got. Like they say, when life throws lemons at you, make lemonade!”.

Come 2018, Hussein got back stronger after his break and released his first official single called ‘Designer Love’ featuring Qyce on platforms such as iTunes, Apple Music, Spotify, Deezer, Anghami and a lot more with Triple B as their music producer. There was no looking back after that.

Hussein’s advice to being a successful musician is to be consistent. His hard work and consistency helped him with various live performances in Oman and his interaction with music lovers, and connecting with them, helped him strengthen his fan base over the years.

Having found his niche in 2019, he spent most of his time working on the fusion of R&B and Hip Hop music on several other beat types – Afro beats and Trap and Soul, in particular. Last September, his latest single ‘Girls in Dubai’ turned out to be his greatest hit, giving him more exposure to the international audience, with over 50,000 streams on various platforms. This gave him the push that he needed, to stay motivated and consistent in his work, he asserts.

Hussein’s unique style of creating music has grabbed the attention of various radio stations in the United States, Power214.com being one of them. World famous celebrities have also noticed him and recognised his  music. With over 10,000 followers on his Instagram account – @nameishussein – Hussein continues to make music that has an unfamiliar and unique touch, as he knows, there are more surprises waiting round the corner for him.

A trend I hate – Baggy jeans

What I love about myself – My sense of humour

(This article was written by Pallavi Nair, a student of Symbiosis Centre for Media and Communication, Pune – India)