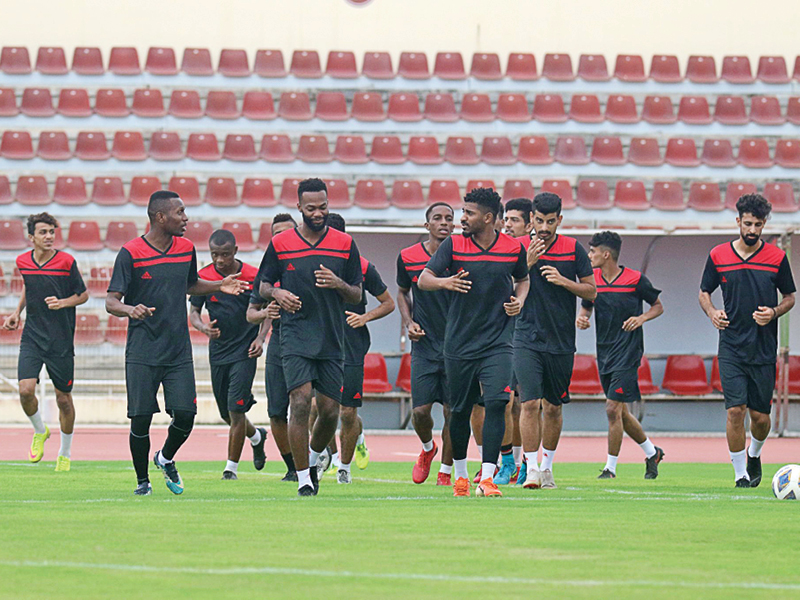 His Majesty’s Cup is a symbol of ultimate pride for clubs in the sultanate. Some of the most thrilling and intense matches have been played over the past many decades as clubs vie to lift Oman’s oldest football trophy.

On Sunday, when Salalah powerhouse Dhofar takes on Sharqiyah giants Al Arouba in the final of the 48th edition of HM’s Cup at the Rustaq Sports Complex, another piece of history is set to written by the finalists. The summit clash kicks-off at 6pm.

Both the clubs are seeking to end their 2019-2020 season on a victorious and a positive note after suffering disappointments in the Omantel League, which concluded last month.

While Dhofar was dethroned by Seeb, Al Arouba suffered a big blow as they were relegated to Oman Football Association (OFA) First Division.

Both the clubs boast of a glorious HM’s Cup history with Dhofar claiming the crown eight times, just one shy of record nine titles held by Fanja Club.

A win on Sunday will bring Dhofar at par with Fanja to become the joint record title-holders while Arouba will aim to clinch their fifth title to be at level with Ahli-Sidab and Al Nasr clubs.

For Dhofar, the win will also secure their second trophy of the season, having won the Super Cup, the season’s curtain-raiser in September 2019.

H H Sayyid Theyazin bin Haitham al Said, the Minister of Culture, Sports and Youth (MCSY), will preside over the final and later award the trophy.

MCSY and OFA in coordination with the Supreme Committee in charge of dealing with COVID-19 pandemic and Ministry of Health have allowed 100 fans from both teams to attend the final after completing health protocols.

The last time both teams played in HM’s Cup summit clash was in 1989-90 season when Dhofar prevailed 1-0.

Speaking on the eve of the final, Dhofar and former national team coach Rasheed Jaber said, “We have been preparing for this final and are confident of lifting the trophy. Since September, we have done well and the games that we have played have helped us in our preparations. Except for Al Mundher al Alawi, who is recovering from surgery, all my players are ready and in good spirits for the title clash.”

Dhofar and national team goalkeeper Faiz al Rusheidi said, “We had good technical preparations and we hope to lift the ninth title.”

Al Arouba’s coach Haitham al Alawi was happy that his ‘team is in the final after a good run in the competition’.

Alawi said, “It is a great honour for any team to play in the final match of the HM’s Cup. Obviously, our opponents are a tough team. They have finished runner-up in the 2019-2020 Omantel League and have some of the leading national team players. My team, on the other hand, is a young side. My boys are passionate and eager to show their mettle by lifting the title.” The coach said that his team ‘has nothing to lose and are under no pressure for the title clash against Dhofar’.

Al Arouba captain Ahmed Saleem said ‘we are ready and the players are aiming for our fifth title’.

Dhofar’s path to the final came after a tough semifinal against Al Nahda. Dhofar had drawn 1-1 against the hosts in the first-leg of the semis and then held their rivals to a goalless draw at the Al Saada Sports Complex to advance on away goals rule.

In the quarterfinals Dhofar won by an aggregate 3-0 against Oman (3-0, 0-0). Jaber’s men began the HM’s Cup campaign with a 4-0 win over Al Mussanah and then edged past Seeb 1-0 to make it to the last-eight stage.

Al Arouba secured a spot in the finals after they defeated Ibri 1-0 in the second-leg to advance on away goals, having lost the first leg 1-2.

Arouba’s campaign started with an easy 3-0 win over Majees and they followed it with a narrow 1-0 win over Al Khabourah. In the quarterfinals, Arouba defeated Al Nasr 3-1 on aggregate, winning 1-0 the first-leg and then emerging 2-1 winner in the second-leg.

For the record, the first club to win  the coveted trophy was Ahli-Sidab in 1972 while Dhofar’s maiden crown came in 1977. Arouba’s first title success came in 1993.

Sur was the winner of the last edition in 2019. The Sharqiyah heavyweight had edged past Fanja 2-1 in the final.