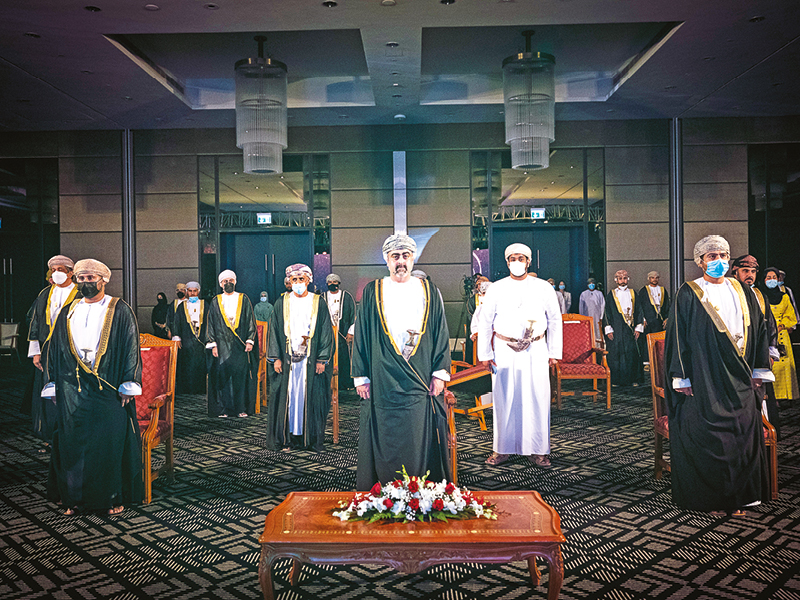 It was held under the auspices of Sayyid Taimour bin Asaad bin Tarik al Said, chairman of the Board of Governors of the Central Bank of Oman.

The event took place in Kempinski Hotel Muscat and was attended by Qais bin Mohamed al Yousef, Minister of Commerce, Industry and Investment Promotion, and chairman of the Board of Directors of Authority of Small and Medium Enterprises Development. Other guests included a number of senior officials from the private and public sectors along with the award’s nominees. The rest of the invitees witnessed the ceremony through virtual channels.

Khalid bin Abdullah bin Hamed al Hosni was presented  the ‘Best Entrepreneur’ title, followed by Grandma’s Mixes which won the ‘Best Home Business’. The ‘Best Micro Business’ was given to Wathiq IT, and the ‘Best Small Business’ in the services sector was awarded to Thawani Technologies. Cloud World Trading (Otaxi) and Tayyar Trading (emushrif) were declared joint runners-up in the category.

For the category titled the ‘Entrepreneurship Supporters Award’, the SME Development Fund (Inma) secured the title  ‘Best Financial Support’, whereas Haya Water received the ‘Best Corporate Support’. The ‘Best Supporting Public Organisation’ went to the Ministry of Labour, and Shabab Reyadi initiative from University of Technology and Applied Sciences won the ‘Best Educational Initiative Award’. The BP Khazzan Project for SME Development was awarded the ‘Best Development Initiative’. The committee withheld the ‘Best Media Initiative’ award due to lack of suitable candidates.

During her speech, Halima bint Rashid al Zer’aiyah, chairperson of the Authority of Small and Medium Enterprises Development, praised the government’s efforts in empowering Omani entrepreneurs to strengthen this vital sector.

“This award is aligned with the directives of the Late His Majesty Sultan Qaboos bin Said – may his soul rest in eternal peace – to enhance the growth of the entrepreneurial community and create a stable business ecosystem for them to excel and innovate. We will also march forward under the wise leadership of His Majesty Sultan Haitham bin Tarik to further boost the capabilities of Omani entrepreneurs and create a brighter future,’’ she said.

The award was organised by the Authority of Small and Medium Enterprises Development in strategic partnership with Oman Telecommunications Company (Omantel) for the second consecutive time.

In his speech, Tariq bin Suliman al Farsi, chairman of the Entrepreneurship Award Committee, said , “This year’s theme of the award is ‘Competition and Innovation’ as these attributes represent the development of values and objectives of entrepreneurship locally and globally. It is also gratifying to witness an increase in the amounts dedicated to the award’s categories and technical support to RO180,000. With 691 contenders this year, we saw a growth of 73.6 per cent in participation when compared to the previous edition. These numbers serve as a testament of entrepreneurs’ determination and interest in this field as well as their willingness to compete.”

The Entrepreneurship Award was established in line with the directives of the Late His Majesty Sultan Qaboos. The objective of the award is to encourage entrepreneurs and SMEs to productively contribute to an evolving economy, now more than ever. It also aims to create job opportunities and add to In-Country Value as well as recognise the importance of this vital sector in forging a diverse national economy.