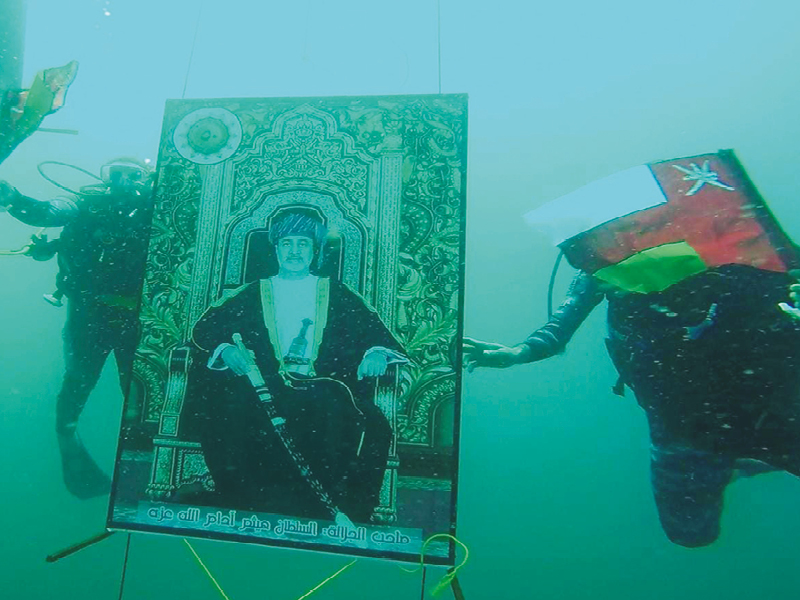 To mark the 50th National Day and pay tribute to the Late His Majesty Sultan Qaboos bin Said, while pledging allegiance to His Majesty Sultan Haitham bin Tarik, divers of the Al Salam Diving Team in the wilayat of Shinas, North Batinah, dived in the waters in Shinas Port with photographs of the two leaders.

The group’s objective behind the dive was to raise awareness on the importance of preserving maritime heritage and keeping beach clean.

The exhibition at a depth of 7m-8m, called Royal Photo Gallery Underwater, was held by divers for eight hours from 6am to 1pm, in cooperation with the Ministry of Agriculture, Fisheries and Water Resources, the Public Authority for Civil Defence and Ambulances, and Marafi.

“The exhibition was possible thanks to the help of the people of Shinas and the participating agencies,” Amri said.

The dive was also aimed at promoting tourism sites in Oman and encouraging the sport of diving in the community.

“The sultanate has many beautiful places for diving which attract tourists from all over the world.”

Expounding the benefits of diving, he said that while it’s not easy and requires training, it

has made him self-confident and helped his decision-making abilities. He urged young people to adhere to safety methods and learn diving in the proper way.