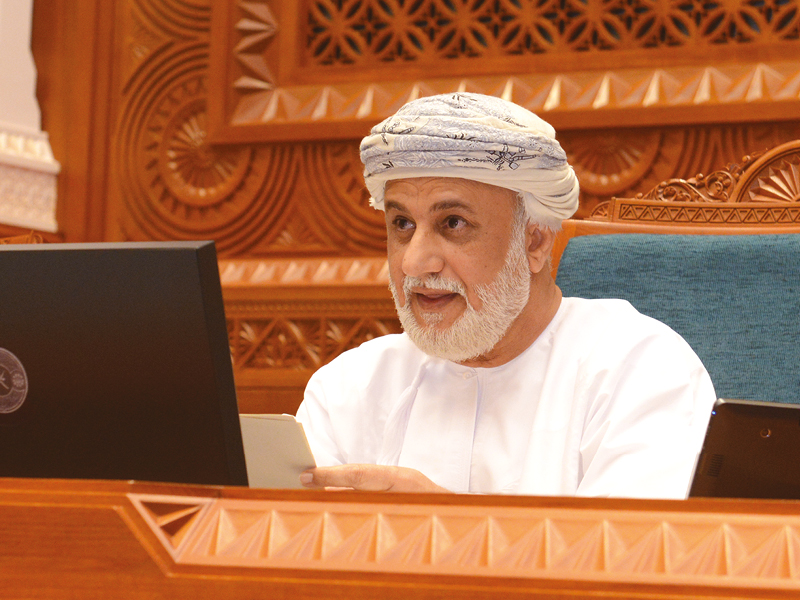 Based on the Royal Order of His Majesty Sultan Haitham bin Tarik, the State Council convened its second annual session of the seventh term on Sunday.

The session was chaired by Sheikh Abdul Malik bin Abdullah al Khalili, State Council Chairman, in the presence of the honourable council members, the secretary general of the council and the participation of some of  members virtually.

In his opening speech, the council chairman expressed his honour and sincere loyalty to His Majesty Sultan Haitham bin Tarik for the confidence he has bestowed on the council to advance their responsibility and to ensure the achievement of the objectives set for the council, in accordance with the provisions of the Basic Statute of the State.

On the occasion of the opening of the second annual session of the seventh term, the chairman praised the accomplishments of the council made over the past six terms, recording his appreciation for the efforts made by the previous chairman, members and the general secretariat.

He emphasised that the council will continue to enhance the consultative march and consolidate its practice, in accordance with the lofty vision of the founder the Late His Majesty Sultan Qaboos bin Said, which culminated in the establishment of the Council of Oman, constituted by the State Council and Majlis A’Shura as per the Basic Law of the State, issued by Royal Decree No 101/96.

Further on, he explained that the vision includes improving the economic situation and achieving financial balance and related issues, which will be the council’s first and main task during the present and future period.

He referred to the constructive steps taken since January, which aimed to improve the sultanate’s economic situation by restructuring the state’s administrative apparatus and government companies, with the aim of developing their performance and improving investment capacity. This is in order to achieve financial balance and raise the efficiency of economic performance. He explained that the efforts in this field was crowned with the blessing of His Majesty the Sultan in October, for the Medium-Term Fiscal plan (2020-2024).

He indicated that it is an ambitious plan, and efforts should be combined to support it, because it aims to achieve sustainable economic levels and create financial conditions that support  Oman Vision 2040.

At the end of his speech, the chairman of the council, prayed to God Almighty to help the council achieve its goals and contribute to supporting the national development march under the wise leadership of His Majesty the Sultan.

The council approved the minutes of the 11th ordinary session of the first annual session of the seventh period, and reviewed the report of the general secretariat on the council’s activities.