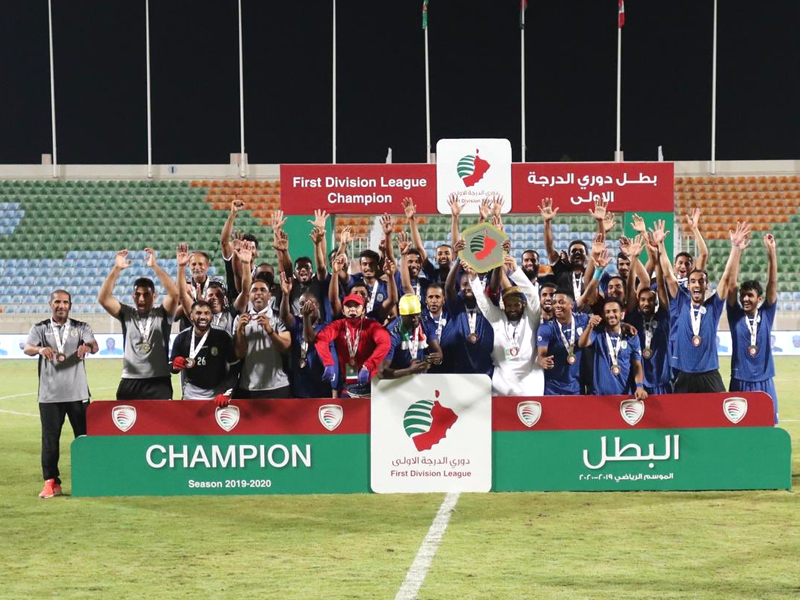 It was a night to forget for the goalkeepers of both Nizwa and Al Ittihad as the two clubs battled for the top honours of the 2019-2020 Oman Football Association (OFA) First Division League at the Seeb Sports Stadium on Tuesday.

Both the goalies committed mistakes to let in the goals to end the match in a 1-1 stalemate. The resultant penalty shootout decided the winners as Al Ittihad’s Mohammed Khamis’ sixth penalty shot hit the post and went wide to hand Nizwa a 6-5 title win in the tie-breaker.

Both the teams’ players converted all their penalty kicks before Khamis hit the far left post to spark celebrations in the Nizwa camp.

display as the teams failed to break the deadlock till the final minutes of the game.

Just as the match appeared to go into a shootout, a long aerial ball from an Ittihad player found Nizwa goalkeeper Musa al Raqadi fumble with a simple collection and see the ball slip into the goal.

With the match in injury time, Nizwa went all out for an equaliser and their efforts bore fruit. And this time, Ittihad custodian, Hussain al Ajmi, was at fault as he failed to clear a shot and off the rebound, Nizwa striker and Senegalese import Cisse, slammed the equaliser.

Earlier, Al Mussanah secured the final promotion spot into the 2020-21 Omantel League after they defeated Al Shabab 1-0 in the promotion playoff to finish third in the league.

Majid al Saadi’s 83rd minute strike was the difference in the match as Mussanah made their comeback to the top-flight league after two seasons.

Nizwa, Ittihad and Mussanah gained promotion and will be seen in the 2020-21 Omantel League, scheduled to begin next month while Al Arouba, Oman and Mirbat clubs were relegated from the top-flight league.