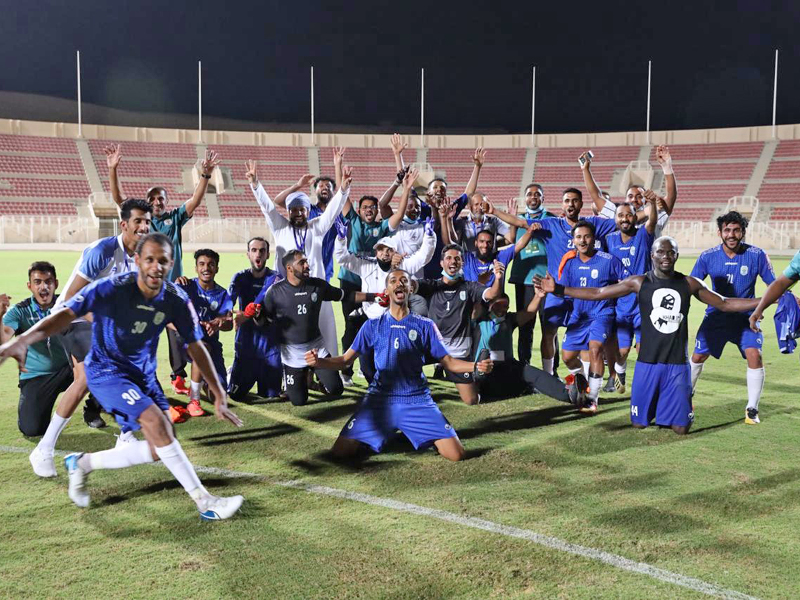 Nizwa and Al Ittihad clubs earned the big tickets to the 2020-2021 Omantel League on Friday when the two sides topped their respective groups to clinch promotion from the Oman Football Association (OFA) First Division League.

The two teams will now clash on Tuesday to decide the winner of the First Division.

On Friday, Nizwa edged past Bidiya 1-0 while Al Ittihad trounced Salalah 3-0. Ittihad’s win ensured it edged past Al Shabab to claim the Group A honours with 17 points from ten games while Shabab finished second with 15.

Former Omantel League winners Sur came third and lost a chance to feature in the promotion playoff after Shabab edged them on head-to-head record.

While the Group A was a close affair, Group B also saw a close fight for the top spot between Nizwa and Al Mussanah.

Nizwa emerged as winners of the group with 17 points while Mussanah came a close second with 16.

The winner of the playoff match between Mussanah and Shabab on Tuesday will decide the third team to be promoted to the top-flight league.

On Friday, Shabab defeated Al Khabourah 2-0 and Sur won 2-1 over Ibri in Group A while Al Mussanah defeated Bausher 3-1 and Samail got the better of Al Mudhaibi 2-1 in Group B.

The 2019-20 First Division season began with a total of 20 teams with five teams in each group. Three teams from each group advanced to the next stage and the 12 teams were then divided into two groups.

The winners of these two groups – Ittihad and Nizwa – sealed the promotion while the third team will be either Shabab or Mussanah.

In his remarks after Nizwa Club’s promotion, the club president Khalfan al Naabi said, “It is a dream come true and what is more significant is that we have achieved it amid lot of challenges and difficult conditions.”

He added, “We thank everyone in Nizwa for their efforts and the promotion is a result of an allround approach. We all worked hard and my special thanks to coach Abdulaziz al Riyami and the players for their relentless efforts. And finally, my gratitude to the fans who stood by us in victory and defeat during the season.”

This is the second time that Nizwa will feature in the top-flight league and coach Riyamisaid, “We would like to cap this achievement with a title win on Tuesday. I thank the fans and the club board for extending full support to the coaching staff amid challenging conditions and difficult times.”

For Ittihad, once a powerhouse in domestic football in mid-eighties, the return comes after they were relegated in 2014-15 season. A former top-flight runner-up (1985-86 season), the club’s climb to Omantel League is a boost to football in Salalah region as they join heavyweights Dhofar and Al Nasr clubs.