The BIG 5 lessons of martial arts 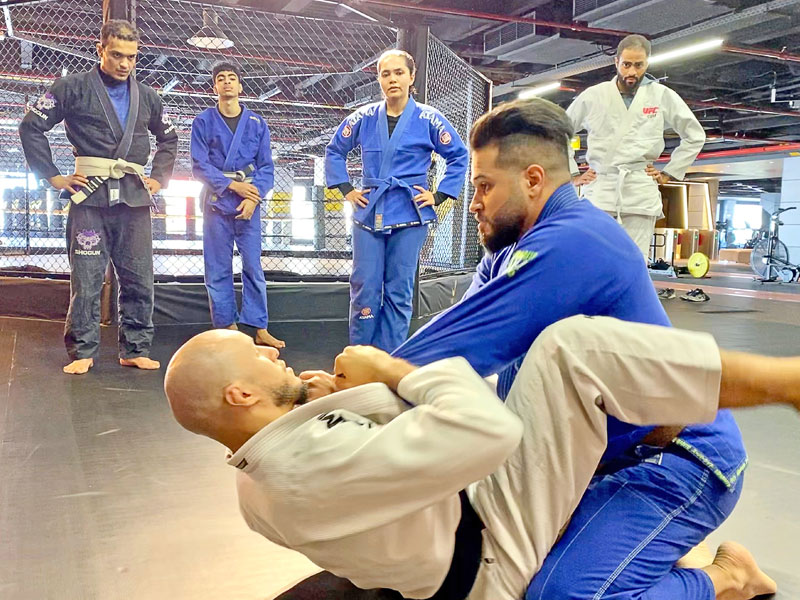 As the martial arts scene in Oman continues to grow, VOMA Global, a new martial-arts focused wellness facility, opens its doors in the country with Brazilian Jiu-jitsu  (BJJ) black belt and gold medalist, Taoufik Serbout as the head coach. The coach, who boasts of over ten years of experience in BJJ, as well as several other forms of combat sports, has a big vision for martial arts in Oman. His students share five key lessons that they learnt in their martial arts journey so far:

1. Don’t judge a book by its cover (pic-Loay)
“That’s a general rule that everybody who practices jiu-jitsu must know, because it’s not always the person with the biggest muscles or the nicest physique that dominates,” explained martial arts practitioner and Brazilian Jiu-jitsu brown belt, Loay al Asfoor.

It is part of our human nature to judge by appearances and it usually takes a while for our judgements to be disproven or even challenged. It’s different on the mats, however, where that snap judgement that you made about the small guy at the gym, for example, can be altered in one roll when you see him take on and defeat a much larger opponent. BJJ is a sport that champions the stereotypically weak and emphasises technique above all else, constantly reminding us to keep an open mind and brush aside our natural human tendency to judge.

2. You either win or you learn (pic-coach Taoufik)

“My vision in VOMA for BJJ and MMA, is to spread awareness of the sport in Oman as much as possible, to establish an academy-like training, and to make all of my students, kids, adults and youth, compete in the regional, national and international levels,” says coach Taoufik.
Al Asfoor adds, “In a competition, even when you lose a match, you learn. So, you are always in a position in which you either win or learn.”

Growth exists outside of our comfort zone and failure is often times the best teacher. Only those who choose to see their bad days as ‘lessons’ transcend to better versions of themselves, both, on the mats, and off.

In martial arts, you are placed in a panic-inducing environment and asked to remain calm. While that may sound counter-productive, in reality, you are being given a controlled environment in which you can practice the important art of composure. Only when you learn to get comfortable in discomfort and remain calm in the face of adversity, can you then begin to think of an appropriate solution.

“I learned that not every situation requires a big overreaction. Take it easy, think about it, and you’ll find the right solution to it,” said another student, Al Azhar al Mawali.

4. Never underestimate your own abilities (pic-Sahara)

“We [as women] usually underestimate our abilities in a sport that we think is male-dominated here, but in reality, martial arts is equal and caters to both genders,” said BJJ blue belt Sahara Hamayon. “It increased my self-awareness and I realised that you only get stronger and better.”

Self-doubt is, and will always be, a crutch that holds you back. In martial arts you see yourself fall down (literally) only to come back stronger, thus, helping you to push past the fears and insecurities that once held you back.

5. Self-discipline is the key to success (pic-Ali)
“The discipline and commitment that I learned on the mats translated into my work life,” said 25-year-old Ali al Nabhani.

Martial arts practitioners, and even masters of the art, are constantly training new techniques and honing their skills with unwavering patience. As a student, you constantly have to set realistic goals, and commit yourself to reaching them, and practising that kind of self-control in training helps you to succeed in other areas of life, as well.