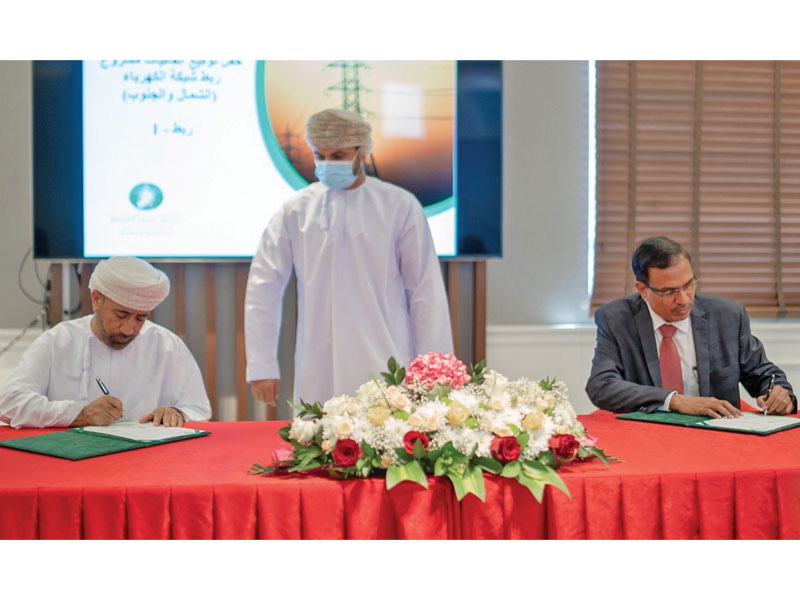 Oman Electricity Transmission Company (OETC), a member of Nama Group, on Monday signed a number of agreements worth RO183mn for the implementation of the first phase of Rabt project that aims to connect north and south electricity transmission networks in the sultanate.

The agreements were signed by Eng Masoud bin Salam al Riyami, acting chief executive of OETC, with the representatives of the awarded contractors from a group of engineering companies specialised in building electricity transmission networks. The signing ceremony was also attended by Eng Omar bin Khalfan al Wahaibi, chief executive of Nama Group.

The signing of these agreements aims to connect the national grid in the north with PDO’s electricity transmission network and Tanweer network in Al Wusta region in addition to SEZAD electricity network in the Willayat of Duqm, according to a statement issued by Nama Group.

The first phase of the Rabt project will pave the way for connecting the national grid in the north of Oman with Dhofar electricity transmission network, which will be implemented in the second phase of the project.

The Rabt project is expected to enhance the efficiency and integration of the national electricity transmission networks. The project will also play a key role in securing the electricity network and opening up new horizons for the use of renewable energy sources such as wind and solar which are abundant in Al Wusta region. This project will play a key role in achieving the government’s ambitions of producing 15 per cent of the total energy from renewable sources by 2025 by connecting the future solar energy stations and wind farms in Al Wusta region.

The Rabt project will also provide secure, stable and reliable electricity to the Special Economic Zone at Duqm (SEZAD) as it will connect the Duqm electricity network with the 400kV national grid, ensuring that the factories and large companies in Duqm are provided with their needs of electricity.

The first phase of the Rabt project consists of 660km 400kV overhead lines and five main grid stations in Nuhaida, Barik, Suwaihat, Duqm and Mahoot. The total cost of the first phase is RO183mn and divided into five projects.

The first project entails the construction of 400kV grid stations at Barik and Suwaihat and linking them to the PDO network. The total cost of this part of Rabt project is around RO39mn and will be implemented over a period of 24 months.

The third project involves the construction of Duqm and Mahoot 400kV stations. These stations will support Tanweer network in meeting the growing demand for electricity in the Special Economic Zone at Duqm. The total cost of this part of Rabt project is RO38mn and will be implemented over a period of 24 months.

The last project involves the construction of Nuhaida 132/400kV station. This project also involves the diversion of 400kV transmission line linking Izki and Ibri stations through Nuhaida station. This station is considered as the main interconnecting point between national grid in north of Oman and PDO electricity network. The total cost of this part is RO17mn and will be implemented over a period of 24 months.