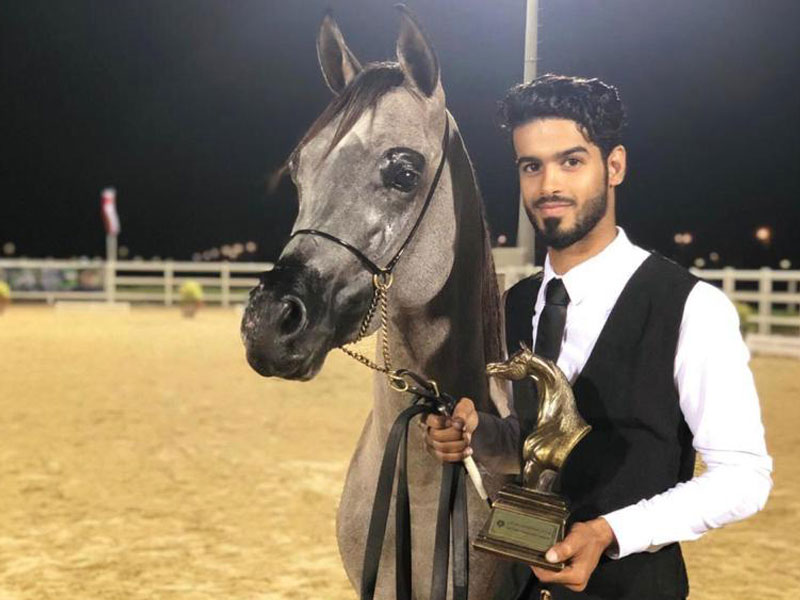 A young, certified horse trainer from Sohar nurtures a dream to set up a huge facility in Oman to breed Arabian horses and promote a love for the equestrian culture

He wakes up every morning and whispers sweet nothings to them… He spends fond moments looking into their eyes and caressing them… He devotes long hours shaping up together, without which no day would be complete.

Thirty year old Saud Abdullah al Ansari, who has nurtured a deep passion for horses and horse riding from his childhood, at his father’s stud farm in Sohar, wants to convert his obsession with horses into a fulfilling vocation. Apart from keeping his passion alive, it would also promote the age old love for horses in the Arab world and get people acquainted with what was once an essential skill in Arabian culture.

Saud’s favourite stud is Tarzan, a racehorse trained for endurance competitions while the other horses in his farm include three mares – Fathima, Tuhfat Almuuk and Casa Blanca, and two stallions – Mureid Alqasr and Almitr. Saud shares a very special relationship with his horses and understands their every movement while the horses, too, reciprocate by not just following his orders but also understanding his mood and mindset everyday.

A certified horse trainer who learnt riding as a lad and retained his love for it well into his youth, Saud provides training in horse riding and other competitive equestrian skills to those interested, at his stud farm at Falaj al Qabil in Sohar. A large number of youngsters visit him daily to pursue this hobby which, he believes, teaches one to be disciplined as well as have a deep respect for animals.

A winner of many prizes, including the first position twice in the Royal Cavalry racing show in 2017-18 and 2018-19, first position in a flat race in 2019-20 and the sixth position in an endurance race in 2017-18, Saud says he wants to further develop his riding and training skills and so hopes to soon take up study in this field in Germany.

“I love horses and my life would be incomplete without them. I understand them and they understand me. I keep them as my family and take utmost care of them,” says Saud who allows visitors who love horses and are interested in riding to visit his farm to further their passion. So far, he has trained over 150 people of all ages, some for riding as a hobby as well as some who were interested in becoming jockeys.

Proud to possess a Master’s certificate per- taining to all fields of equestrian from the Royal Equestrian Club and a Trainer’s Card from the Oman Equestrian Federation, Saud is more than content with what he is currently doing. However, his dream is to set up his own training academy where he could breed Arabian horses and pro- mote a love for the equestrian culture in a big way. And, he hopes to gear up to make is dream a re- ality in coming years by getting acquainted with international breeding and training routines to be able to raise the standard in his farm.

“I want people in Oman to get acquainted with horses, understand them, learn riding and other skills. I am sure many talented riders would emerge to participate in regional and international competitions to bring greater glory to Oman in this field,” says Saud, hopeful that someone would come forward from the government or from private establishments to support him to realise his dream.