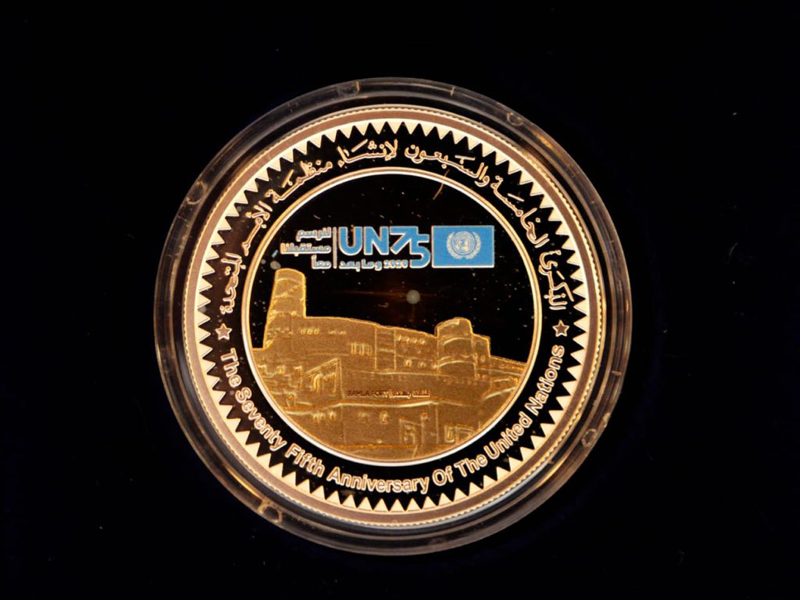 To celebrate the 75th anniversary of the United Nations (UN), Oman Post and Central Bank of Oman issued a commemorative stamp and silver coin respectively under the patronage of H E Mohammed bin Nasser al Wahaibi, Undersecretary for Administration and Financial Affairs in the Foreign Ministry, on Sunday.

The ceremony was attended by H E Taher bin Salem bin Abdullah al Omari, executive president of the Central Bank of Oman, Abdulmalik Albalushi, CEO of Oman Post, a number of representatives of United Nations in the sultanate, and officials from the Foreign Ministry.

The stamp features Oman’s flag colours, the international organisation’s 75th anniversary emblem, and the slogan ‘Shaping our future together’.

To mark this symbolic occasion, the UN has launched the ‘UN75’ initiative, which aims to promote deep reflection on international cooperation and the role the UN will play in the future. In this context, Oman is contributing to a global conversation that aims to involve people from all around the world to listen to their hopes and fears, and to learn from their experiences, in order to construct a global vision for 2045, the year that will mark the centenary of the UN.

Albalushi said, “The United Nations today remains true to its mission to bring nations and people together to preserve peace and security, and improve lives everywhere. These principles that are adopted by the UN are enshrined in Oman’s coveted history when it comes to equality and dignity of people, while always advocating for peace and prosperity for the human race. This new stamp is our way of reflecting on what humanity has achieved and on what more we can do as a collective to ensure a better tomorrow.”

The new stamp was prepared in cooperation with the United Nations Postal Administration, which began issuing stamps in 1951 and marked the 10th anniversary of the UN on stamps. Photographs of the renovated UN headquarters in New York City were pictured on stamps issued in 2015 for the 70th anniversary, while countries from around the world are issuing commemorative stamps to celebrate the 75th anniversary.