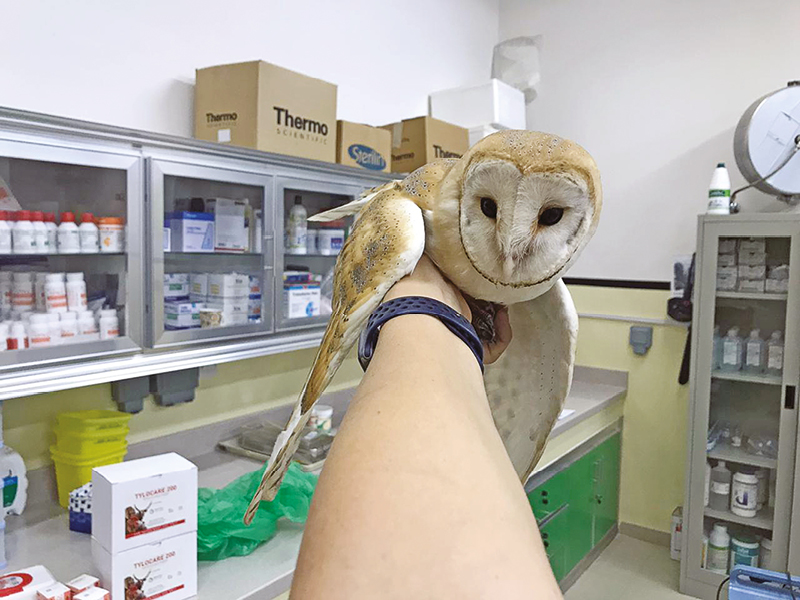 A barn owl, found sick at the Korean Embassy premises in Muscat, is recovering at the Wildlife Rehabilitation and Breeding Centre of the Royal Court Affairs. The bird is in stable health and alert now.

Speaking to Muscat Daily, Hajeong Lee, administrative officer at the Korean Embassy in Muscat, said, “The owl was found on the ground while our gardener was clearing a tree branch that was blocking our CCTV. The bird was weak. We immediately rescued it and put it in a box and contacted the Environment Society of Oman for help who directed us to the Wildlife Rehabilitation and Breeding Centre.”

Hajeong said she was worried that the owl may have been injured while the tree branch was being trimmed.

“We took it to the experts to check if it was injured while we were trimming the branch but we got to know that it had eaten something poisonous,” she said.

She said that since the owl is a wild bird, it has to be released after full recovery.

“Once her treatment is complete, the owl is expected to regain the ability to fly and be released back into the wild from the embassy premises. She’s a beautiful bird. We just want her to be able to fly again,” Hajeong said.

“The Korean Embassy remains committed to deepening our ties with the sultanate, while upholding the core values of Oman, including the protection of wildlife,” she added.

Rescue teams, who responded to the request by the embassy, suspect the owl was poisoned.

“Now she is completely wake, flying very well and I moved her to an outside cage to check if she will eat well without help. If everything goes well, I would like to release her back,” said Dr Barbara Golachowska, who is observing the owl.

Dr Barbara said the female bird is a barn owl and had severe diarrhoea.

Barn owls are silent predators of the night. With a whitish face, chest and belly, the owl roosts in hidden, quiet places during the day. By night, they hunt on buoyant wingbeats in open fields.