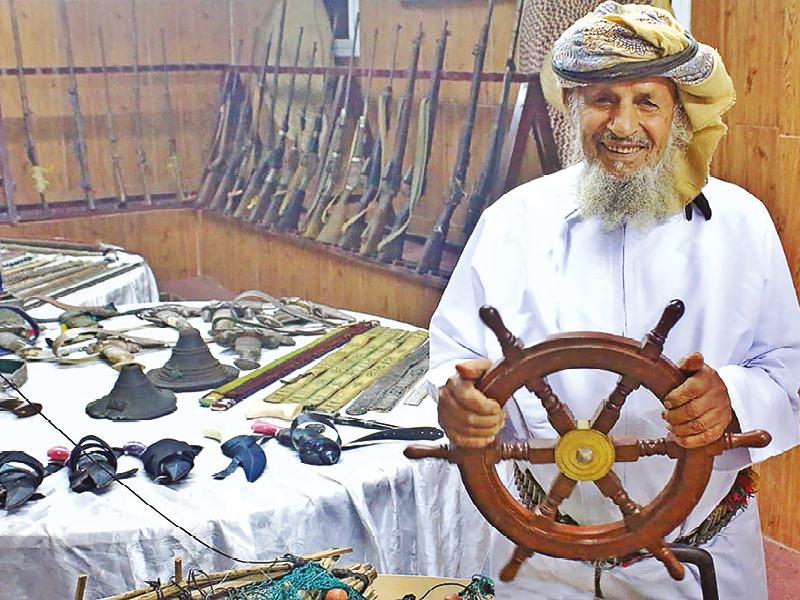 Khalfan al Hosni, 80, has dedicated his life to collecting and showcasing traditional artefacts in a museum in his family home

The Bait al Marah museum in the wilayat of Al Khabourah, North Batinah governorate, is a star tourist and cultural attraction. It was started by octogenarian Khalfan bin Mohammed bin Sulaiman al Hosni who has dedicated the better part of his life to the museum. Housed in Hosni’s old family home, it has a sizeable collection of historical artefacts that were once part of daily life in Oman.

Acknowledging Hosni’s self-less pursuit of preserving Omani heritage, the Ministry of Heritage and Tourism has approved construction of a new museum building which will be able to accommodate his entire collection, with provision for more, and also welcome more tourists.

For the last 50 years, Hosni has travelled around the sultanate collecting the valuable items that are on display in the museum. He has also participated in events such as the Muscat Festival to show the collection to raise awareness on Omani tradition and culture.

“It is not easy to collect such antiques. It needs a lot of time, dedication and money. Many owners do not like to part with their heirlooms easily and need a lot of convincing,” Hosni said, adding he seeks the support of the public as well as private companies to help him set up the new museum.

Hosni has been offered handsome sums of money for some items in his collection, which he turned down. “Visitors from across the world, besides school and university students, come to my museum. I want its reach and influence to grow; hopefully, the new museum will help achieve that goal,” Hosni said.

Having inherited some artefacts from his grandfather and father, it stoked his passion for the preservation of the heritage of the country.

The idea to set up Bait al Marah – ‘a resting place for camels’ – popped in 1990s when he started turning his family home into an antiquity centre and gradually filled it with his collection for display to local and foreign visitors. “The museum reflects the history of my ancestors.”

The collection comprises more than 2,000 unique items, some dating back more than 200 years. It includes weapons such as khanjars, daggers and guns from World War I, copper tools and pots, wooden doors, coins and silverware. While Hosni’s focus is Omani heritage, the collection includes currency from several countries.

The most valuable item in the collection, arguably, is a 200 year old Quran handwritten by his grandfather.

Hosni hopes to make Bait al Marah a national museum so that it attracts even more domestic and international tourists to understand and appreciate the heritage of the sultanate.