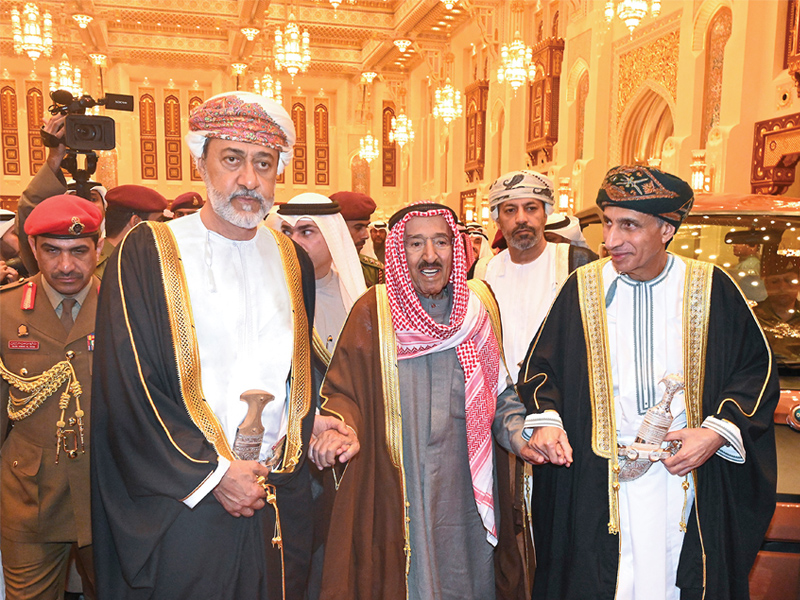 For many Omanis, Sheikh Sabah stood out for trying to balance relations with Kuwait’s neighbours and rebuilding links with the Gulf Cooperation Council

Oman mourned the sad demise of Kuwait’s emir Sheikh Sabah al Ahmed al Sabah who died on Tuesday after serving his people and the Arab and Islamic nation for more than 50 years.

The emir ruled the Gulf state since 2006.

For many Omanis, Sheikh Sabah stood out for trying to balance relations with Kuwait’s neighbours and rebuilding links with the Gulf Cooperation Council.

He mediated in a Gulf dispute that saw Saudi Arabia and its allies boycott Qatar.

Condolences poured in from across Oman on social media.

“It is with great sadness and sorrow that the Arab and Islamic world today loses the Prince of Humanity and our second father, the Emir of Kuwait. We offer our condolences to the brotherly people of Kuwait, who have eternal relations with us written by our ancestors,” said Eng Azza al Ismaili, former Minister of Technology and Communications.

Eng Mohammed bin Salim al Busaidi, chairman of the Board of Directors of Omran Group, said, “We sincerely loved him but he is gone now. The emir had his sincere attitudes and great wisdom. My condolences to the brotherly Kuwaiti people and to us all.”

Last month, on the orders of Sheikh Sabah, the Kuwaiti Council of Ministers named a road after the Late His Majesty Sultan Qaboos bin Said.

The Seventh Ring Road is one of the largest and major roads in Kuwait.

The Oman Embassy in Kuwait appreciated the initiative of the Council of Ministers and the Municipal Council of Kuwait for implementing the emir’s orders to name the Seventh Ring Road after the Late His Majesty Sultan Qaboos.

‘Upon His Highness Emir Sheikh Sabah al Ahmed al Sabah’s order and in recognition of the efforts made by the Late His Majesty Sultan Qaboos in backing the GCC, and the issues of both Arab and Muslim nations, the cabinet tasked the Kuwait Municipality to name one of the country’s main roads after the late Sultan,’ the statement said.

Early this year, in his condolence message to His Majesty Sultan Haitham bin Tarik, Sheikh Sabah said he lost a dear brother and companion with whom he shared an outstanding personal relation.

The deep-rooted bilateral relations between Oman and Kuwait have been further cemented by promoting cooperation between the governments of the two countries in many areas with the objective of consolidating the bonds of fraternal ties and making the best use of cooperation in various aspects which serve the march of joint action.

Eng Saleh al Shanfari, CEO of Oman Food Investment Holding Company, said, “My sincere condolences to the brotherly Kuwaiti people and the Arab and Islamic nations on the death of Kuwait’s Emir. The people of Kuwait loved him and the whole world loved him too. May Allah have mercy on him.”

Ahmed al Balushi, CEO of Mwasalat, said, “My sincere condolences to the brothers in  Kuwait for their loss, and we ask God to grant them strength to bear this grief.”