Feast for the senses 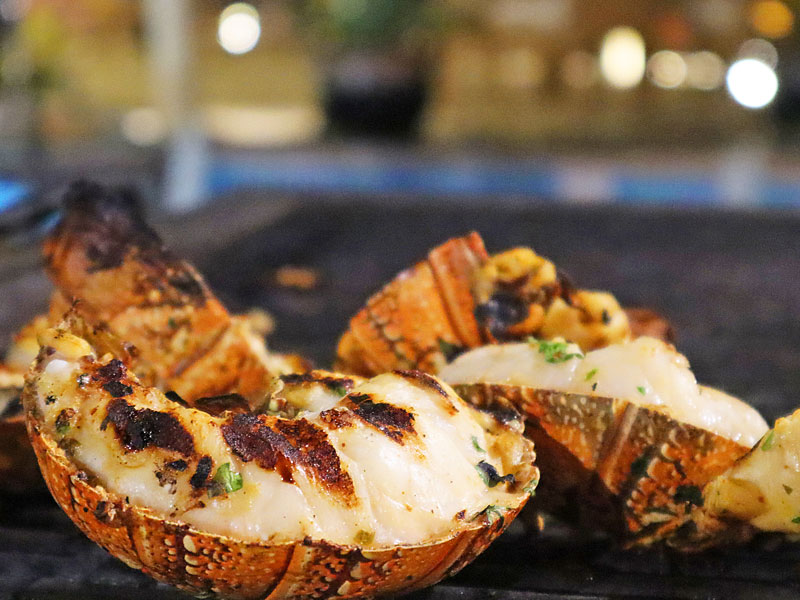 Everyone loves the smell of grilled fish, freshly served with smoky flavours and indigenous sauce. Add a little ambience of water, sound and lighting. That’s the scene at the Sea Food Night at Sheraton Oman Hotel.

Known for its excellent array of sea food delights on Wednesdays, these nights once again re-opened with a gala food fiesta last Wednesday. And though it seemed strange after the lockdown, the hotel lawn (known as The Courtyard) witnessed guests converging to relish the explicit seafood delights.

The aroma of freshly grilled lobsters was so intense that they hit me even before I entered the hotel premises. Having good food must not be limited to the stomach, it must also touch the soul (that’s what I believe) and Sheraton seemed to offer just that – a feast for the senses, from the depths of the ocean.

The warm ambience at The Courtyard was draped with streaks of smoke, yellow and orange flames, as well as lilting music that seemed to compete with the stuttering sounds of red hot coals in the barbecue furnaces at the live stations. It was a culinary wonderland waiting to be explored.

I have never been a big admirer of cold salads, but with insistence from the chefs, I did try out oysters and mussels which were laid over beds of ice, and felt sudden gusts of new-found joy within me. I am from the land of rivers (West Bengal), and though I’ve had the privilege of savouring a variety of fresh water seafood, the wonders from the sea, I realised, takes one to an altogether new realm.

Adil Shaikh, executive chef of Sheraton Oman Hotel, said, “We have guests from all walks of lives to relish the popular sea food night in the hotel. Both sections, grills and cold salads, are popular among guests. We make sure to have the fish supply from local suppliers from the local market, thus, retaining the freshness and taste. The opening night itself has seen a good response and we are optimistic to carry on the legacy of our Sea Food Night that has been popular for decades. We want to give the feel of authentic sea food to our diners.”

The spread included over 15 varieties of seafood. And, as disclosed, on display were 200 pieces of oysters, 60kg of prawns/lobsters and 10kg of Omani crabs. Seven chefs from different nationalities were seen in action at various live stations to conjure up culinary delights that carry a whiff of the sea.

Ryan Cornelio, associate director of Sales, said, “As you know Sheraton has been known for its Sea Food Night in Muscat since the 1980s. Re-launching the night, we get to welcome our loyal guests back, besides new customers, who would like to experience this culinary offering. The response has been extremely positive.”

The hotel has also taken care to maintain precautionary measures such as social distancing at the counters as well as protective gear such as masks nd face-shields for chefs and other staff. So, the diner can experience the same culinary magic, but with utmost care.